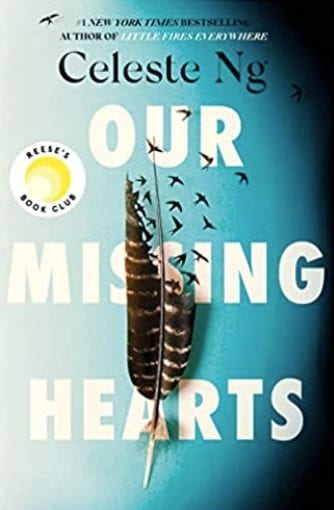 This is a fantastic book. Set in an alternative world but one that feels a little too familiar, Protecting American Culture and Traditions (PACT) sets the agenda for how life is run. All things that run contrary to this way of life must be removed, books, products made in China and of course people. Everyone is encouraged to watch over each other, for the good of the nation. And there, hidden away, is the law that the state/Government can remove children from parents who do not uphold the correct traditions and ways of life.

One family, Margaret, Ethan and their child Bird live happily in a suburban house enjoying their life. Margaret is a poet and whilst nursing her young son wrote poetry. Her husband, Ethan is a professor of linguistics and loves words. Their son loves stories which his mother tells him whenever she can. And then, like a tidal wave bursting, the Government enters their lives when a young female protestor leaves a line from one of Margaret’s poems on her banner when she is killed by the police and all of a sudden these lines go viral.

Who is to blame? Why, the poet of course and Margaret and Ethan agree that she should leave home and never be heard of again to save her son. Ethan loses his job but is employed in the library shelving books each day. In the meantime, more and more children are removed from their homes and if under the age of 12 are rehoused with more suitable families and if older, put into institutions.

This is the part that doesn’t feel a million miles away. There have been plenty of examples of the state or Government forcibly removing children ‘for their own good’. There were the aboriginal children, the Stolen Generations, forcibly removed by the Australian government under the Forced Adoption Policy; there was the First Family Separation Policy in the USA where American Indian children were taken from thier families and tribes; there were the children in Ireland forcibly removed from their single mothers by the church and state working in collusion and in Canada the indigenous children were forcibly removed by the Government and placed in ‘Residential Schools’. It is probably still going on somewhere in the world. How about America at the border with Mexico? Removing children to keep the population oppressed.

One element of this book is about motherhood and the ties that bind in families and who the missing hearts are. In Ng’s alternative world, the families where children are being taken from are mostly east Asian, a group of people who gradually become persona non-gratia and are seen as the enemy with the rise of China and behind ‘The Crisis’ which was an economic collapse. It sounds not unlike the increase in racial attacks after the Covid virus escaping from Wuhan.

Bird sets off on a quest to find his mother and in doing so discovers the power of stories to help remember, the libraries and librarians who form a network to track children and families who are separated. He also finds his best friend Sadie who was a fighter and refused to tow the line.

I thought the activism in the book was creative, built around stories and so much more powerful than holding up traffic. It is based on the idea that stories can change hearts and minds. So true.

Other books that you might enjoy if you liked this one:

The Book of Form and Emptiness by Ruth Ozeki