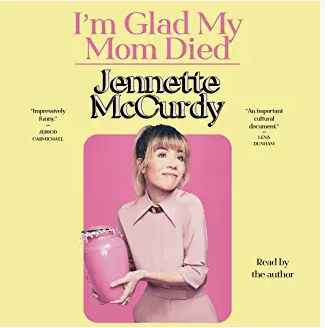 And so am I. I really have had enough of these trauma memoirs although this one is very well written and read by the author if you get the audiobook which I did.

You don’t have to go far into the story for the warning bells to ring: a mother who wants you to act at the age of 6 because she didn’t get the opportunity; who taught you to calorie control on your 11th birthday so that your breasts wouldn’t develop, who wiped your bottom until you were 10yrs old, who inspected your breasts and vagina until you were 17 years old, who became hysterical when you said you didn’t want to act; who showered you until you were 16 and on and on it goes until I couldn’t wait for her mother to die.

After her mother died, McCurdy gave up acting at the grand old age of 20 and started therapy and is probably still in it now. It was social, emotional and physical abuse but if you home school few will know about it. Her mother did have mental health issues but refused to admit them, didn’t get treatment for them and everyone suffered. In fact, when you hear McCurdy’s grandmother complain, you start to get some idea about the fact that maybe it didn’t start with Jenette’s mother.

Good as this was, I am really fed up with this type of memoir. It seems the number of ways to damage your family are endless.