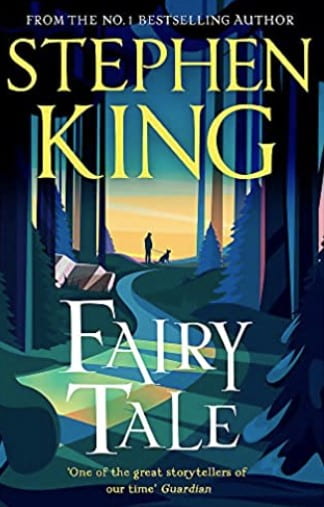 He shook his head and laughed, as if reading fiction were a frivolous pursuit, maybe even crazy.

I have never read a Stephen King book before apart from his memoir On Writing as I don’t really do horror and scary in film or books. However, this is fantasy with some horror in it but considering what was going on in the world when he wrote this, probably not as much as in real life. Published in 2022, the COVID years must have had some part to play in the worlds King created.

When I started reading the book it felt like a young adult’s book and a story I have read many, many times before and in a way, structurally, it is. Even the short chapters, illustrations and gothic first letters reminded me of children’s fiction which is probably what it was supposed to do. It may also be because the narrator is a 17 year old boy, Charlie Reade. I haven’t read enough King to know whether this was intended or his style. The setting is also a common trope, old, dilapidated house and a familiar to keep him company on his quest, a dog called Radar who is getting on a bit. And of course, he doesn’t enter this other world until the dog’s owner, Mr Bowditch dies. You need something to transport you there; it’s boredom in The Lion The Witch and The Wardrobe and it is a magic key in Biff and Chip learning to read books.

I have to admit that it took rather a long time to get to the other world. You know it is coming from a long way off because Charlie is warned that he mustn’t go into the shed, and he hears funny noises from it, but I had almost given up by the time we got there. And even before you do get to that point there are several fairy tale references which I have to admit were quite fun, but not difficult, to spot.

I think once you get to that point were you are thinking about the fairy tale links, you are not necessarily in the story but standing outside, viewing it as a literary experience, and so I think this book worked for me as a teacher of English but not necessarily as a reader. It did make me stop and think about what a fairy tale was

They are all in there alongside fairy tales that you can name – The Hobbit, Wizard of Oz, Rumplestiltskin, Sleeping Beauty and more. This is also a coming of age story – it could be argued that Charlie had grown up early caring for his alcoholic father but this was devolping maturity and a deeper understanding of love.

Not for me but fascinating.