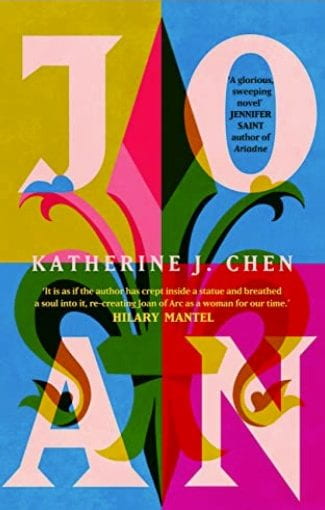 Having originally thought this might be quite a dense book, I really enjoyed it. Don’t be fooled by the first couple of pages. They set the context and are dense. The rest of the book explores how Joan might have become the person she was; a leader of men; fearless in battle and someone who demands things of God. This is a ‘reimagining’ of her story and a good third of the book is given to her childhood to show what drove her to become and do what she did.

She lived in a hamlet with two brothers and a sister who was beautiful and this book stresses the whole way through that Joan wasn’t, I think because that is one of the ways in which women can wield power and Chen wants to strress that it wasn’t the case with her Joan. Her father hates her and constantly beats her, doesn’t give her enough to eat and she spends her time sleeping out under trees, playing in the woods and helping people mend their fences, windows etc. Her Uncle is an infrequent visitor, never staying long in any one place but he is a great storyteller and often regales her with stories of battles and people. All of this until their hamlet is raided by the English and her sister is raped and commits suicide.

This sets Joan off on a different trajectory where she eventually meets the Dauphin and is given permission to lead an army of men.

What I really liked about this story is that she wasn’t a leader of men because she was beautiful, she wasn’t, or because the church said she had visions and that made her special. In this book she doesn’t have religious visions although she does have visions or day dreams about war and how it can be won. The book’s message is that this girl’s upbringing and personal traits enabled her to become the leader she was. She was strong, could move carts on her own and was quick to learn, managing to fit into the court when she needed to. In this book she wasn’t an ephemeral beauty, wafting around relying on the church to let people know how special she was.

My gifts come from myself. They were beaten into me. That is all.

Like many of the art works and previous books about Joan, this shows her responding to a vision in her garden encouraging her to go to war. The book is much more pragmatic than this.

Of course, it was also the church that brought her down, alongside losses in battles because she wasn’t given enough men to fight. And again, she refused to go quietly and lead a life as a wife of a farmer but stay true to her vision of her self. The book does not end with her death but with a glimmer of hope and I liked that although I do know that death at nineteen was the outcome for her. The books sets up her downfall well and you can see it happening from some distance away. In fact, almost as soon as she was noticed by men with power.

. . . I will tell you something I have learned in my forty eight years. Either a woman must be raised high, higher than the heads of men or she will be crushed beneath their feet. So, we must raise you high. We must raise you to the height of heavens themselves. We must dress you in the mantle of God.

I much prefer this version of Joan, a woman who through circumstances, probably quite common in those days, and knowledge about herself became a leader of men. And I wonder, is it any more inaccurate than any of the other books about Joan? Having read Trust by Hernan Diaz, where the message is that fiction can be truer than fact, this is most definitely a Joan for our times just like all the other Joans in books are for theirs.

Possible questions about the book

What did you previously know about Joan? How did this book fit with what you knew?

This is a secular imagining? What did you think of this approach? What is the role of the Church in this book?

What does this book say about power?

This book is trailed as a feminist retelling. What makes it feminist?