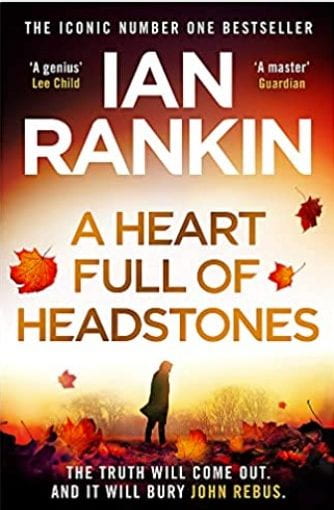 Each Rebus book I read I think they’re going to get him this time, but like the slippery slope he is on, Rebus is still not done. He may, however, be by the time we get the next book. Or will he be let off the hook again because surely his sense of justice outweighs the things he shouldn’t have done?

This, the 24th book in the series comes the closest to Rebus being caught for the dodgy policework that he has undertaken with the book opening and closing with him in the dock. A policeman from Tynecastle Station is being investigated for domestic abuse but everyone in the police knows that Tynie is a house of police who take the law into their own hands and have lots of side jobs – in fact they are the linked to some of the biggest criminals in the area. Whilst the police officer, Haggard, is being investigated, he is murdered and that sets Siobhan Clarke and Malcolm Fox off on a chase to find the murderer but also try and bring the leader of the Tynie police down. The trouble with doing that is you have to bring Rebus down too.

Big Ger Cafferty is still involved with crime even though he is now in a wheelchair with a carer and is still pulling the strings regarding drugs and running the show.

I read somewhere that this book was Rankin’s response to police abuse and to a degree it is with the Tynecastle station reminiscent of what is going on in the Met at present but I think this book is really about passing on the baton and this time it is also to the women. Siobhan Clarke has taken over from Rebus in the police, The Mackenzie’s have taken over from Big Ger and ex-partners and wives are divorcing their husbands and running their own criminal networks. Rankin allows us to think that Cafferty is out of the business but it turns out that he isn’t and has a carer, Andrew, who is an apprentice.

Rebus attempts to kill Cafferty but is caught on the CCTV cameras in the flat and handed over to the police by Andrew.

He wore an expensive suit and sported a new haircut. Dapper and ready for bigger things, he locked eyes with Rebus, and grinned.

This is a great read and well worth the wait. The book leaves us perfectly set up for the next one – will Rebus be found guilty, will Siobhan move force and will Andrew take over Cafferty’s business?