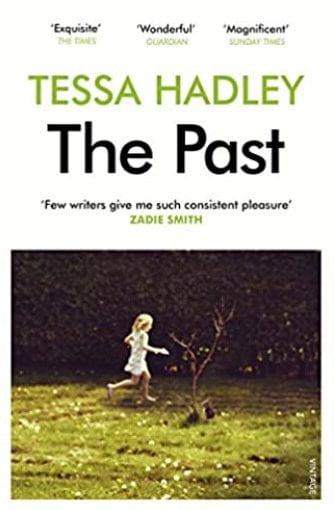 This is one of those books that I always think of as a swan: serene on the surface but paddling frantically under the water.

Four siblings meet up in their holiday home which used to belong to their grandparents and was where they grew up with their mother after she left their father. Harriet, Alice, Roland and Fran. They are there for three weeks, which seems like a long time to spend with family, and need to decide what to do with the house. The house is another character in the book and then there are the outsiders, Roland’s third wife, Pilar, and Kasim the son of an ex partner of Alice’s. They provide the grit and the friction which reveals things to the family. And there are also the children of Fran – Ivy and Arthur and Roland’s daughter, Molly.

The house and setting are where Hadley has some of her best descriptions. It is romantic and bucolic full of wild flowers and slightly dilapidated buildings, damp but once aired and used again, springs into life. The weather is warm and the family laze around, having picnics, glasses of wine and letting the children roam freely.

The noise of their taxi receding, like an insect burrowing betwen the hills, was the only sound at first in the still afternoon, until their ears got used to other sounds: the jostling of water in the stream that ran at the bottom of the garden, a tickle of tiny movements in the hedgerows and grasses. At least it was an afternoon of balmy warmth, its sunlight diffused because the air was dense with seed floss, transparent-winged midges, pollen; light flickered on the grass, and under the silver birch leaf shadows shifted, blotting their penny-shapes upon one another.

It sounds wonderful, and having a holiday home myself, I know exactly these type of thoughts. Usually when I haven’t visited for a little while and before the practicalities and realities of caring for a home you do not live in appear. Our home was passed down from my parents and everything in it reminds me particularly of my Dad who fixed the elctrics, plumbed in the kitchen and bathroom, made the bookshelves in the lounge and created the cupboard for the hot water tank. The shelves are full of books and authors my Mum loved. The past is very present in the house, slowly fading as we repaint the rooms, find new duvet covers and towels and generally put our stamp on the place. But we need the electrics updating, there is a lot of sparking and only one socket in each room, and that will be a significant shift and break from the past when we get round to doing it.

The children are left to sort themselves out and run wild, having their own life and secrets with Ivy wearing a motley collection of her own and others clothing. They come across an old cottage and find ‘treasures’ that horrify/excite them and that they keep secret until the end.

Time is obviously a point of discusion in this novel, both in the way it is structured and in the shadow it casts across the present. The book is divided into three parts – present, past, present. I thought their might be some big revelation in the past section of the book, but again it was very quiet, hinted at and became a little clearer at the end back in the present. The house encourages the siblings to behave in ways they did as children, the sisters a little dismissive of their brother, Alice always wanting to swim deeper in the past and none of them wanting things to change.

As the change is building in the book, so the weather changes to rain and of course, all being trapped in the house at this point exaggerates the tensions and everything comes to a head. The two older children go missing as does Harriet and the family decide to sell the house, severing elements of the past. The symbolism used around this is quite obvious and we could have been left to work a little harder as readers. At the crucial point, Fran decides that Arthur’s hair is too long and cuts it off, revealing not the little, chubby boy that she remembered

As the long coils dropped one after another onto the green linoleum, around the legs of the kitchen stool, a new Arthur seemed to come into being: without his old baby sweetness, shrewder, more bony and less soft, more equivocally male. Hidden behind his hair, he’d been able to develop into a new self without their noticing.

The light which we see through in the book is a constant, illuminating events or emotions and again might slightly over do the impact in places. As Alice walks along thinking of the place and people she has a moment of clarity and we get . . .

Sunlight pierced the dense pine canopy high above and fell in shafts through the dusty brown space that made her think of an empty theatre.

I think this is a book about longing and about how sometimes it can trap you into feelings and behaviours that stem from the past.

Our starting pint questions based on the Vantage