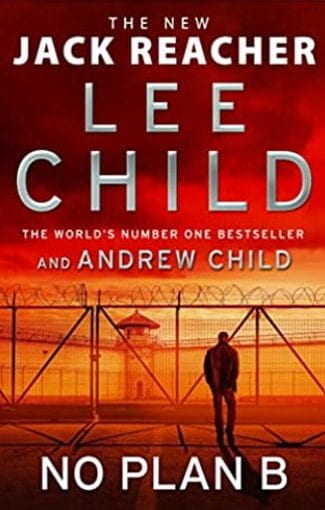 Imagine what would happen if you decided you would like to move on to other things, you are after all 68 years old,but you have a really successful series on your hands. What to do? Why, you pass it on to your younger brother, sho is also a writer, and let him carry on. After all, this series is probably the golden egg. And then the next two books are not as good in some of your readers’ eyes. What do do now?

I am not sure but I would guess that Lee had much more input into this book than the previous two as this feels more like the old Reacher and the wtiting style is similar to the older books: lots of short sentences and pacy action. NO dawdling over tech anywhere, we are back to analogue thank goodness.

Reacher books are released every year and appear in our Tescos end of October-ish and I resisted until mid-November when I bouught a copy and I enjoyed it.

Reacher witnesses a woman pushed under a bus which is then deemed to be a suicide and so he sets off on a journey to discover what happened with several fights along the way. This murder is linked to a correctional facility that appears to rehabilitate its inmates and is able to release those that were found guilty but really were innocent. Of course, this facility is just a cover for drug manufactring and providing people with new identities.

This felt like the Reacher stories almost, but not quite, back to their original glory. I am not sure how much each brother contributed to this book but it is a step up from the previous two and I would imagine many fans are relieved.