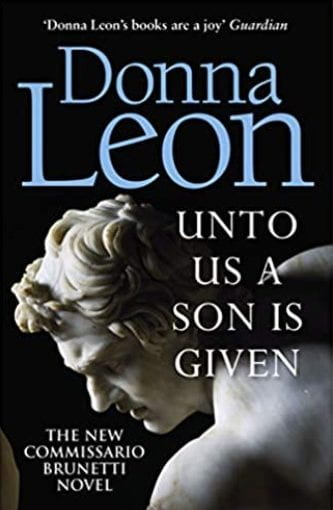 Surrounded by love from his family and in-laws, Brunetti and his father-in-law find it difficult to imagine why an elderly man, Gonzalez Rodriguez de Tejada, would want to adopt his younger lover as his son. Particularly when his friends are all against it. The question is, is this a crime? Of course not, but Leon does make the point that if a man were doing the same with a young woman there would probably be less talk about it.

Brunetti investigates gently to sew what sort of person this young man is and even calls on Signora Elettra to help with her magnificient computer skills because:

Long before computer chips could collect someone’s personal data, their neighbours did.

It takes until p169 to actually get a crime, more than half way through the book when a female friend of Rodriguez is murdered and it isn’t complicated to work out who would do it – the motive is quite strong. But that isn’t the point of the book. The point is to deliberate over loss and lonliness in old age, the role of family and what we do with all this ‘stuff’ we have accumulated over our life time, particularly if it is valuable art.

Leon is a master at using Brunetti’s family life and reading to unpick and shine a light on the crux of the issue. And once again, Venice is a character in its own right with the losss of the ‘old ways’.

Brunetti, like Inspector Montalbano, is a fan of fine food which is frequently referred to in the book. I wondered why this might be and can think of several reasons. It brings the detective back to his home/family and anchors him in a world far away from crime. It brings a sense of place. Sicily and Venice both have their own distincitve cuisine and adds to the appeal of the location so rather than just turning a reader away with the gruesomeness of the crime, we want to visit and try out the food.

It may even create more suspense as the plot goes on hold whilst we all down tools and eat. Interestingly, I can’t think of an American detective who is so engrossed in food but came up with Hercule Poirot who enjoyed his food and with the residents of Three Pines, Louise Penny’s wonderful Gamache series. I would love to have a hot chocolate in the bistro in Three Pines and meet all the characters amidst the log fires and hot chocolate.

Here in the UK, my thoughts turned to Sweeney Todd who put his victims into pies, playing on the fears of those of us who wonder where the food has come from which is not quite the same as a gastronome detective.

Long may this series continue.

Reviewed in the same series: Give Unto Others