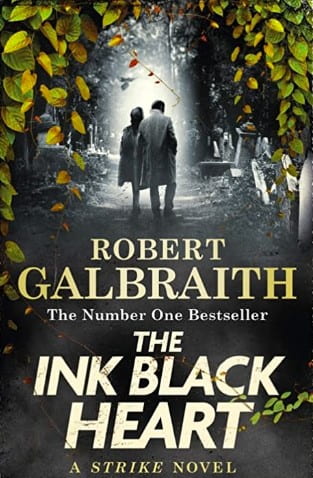 This is a story of the ways in which what happens online can affect real life, and of course JK Rowling has form for this in real life.

A woman visits Cormoran’s agency for help but is turned away because they are already too busy and because they don’t have the expertise for online investigations. However, a week or so later the woman turns up dead in Highgate Cemetry along with the cofounder of the cartoon they have created. He survives but is permanently paralysed after being stabbed in the neck.

For those who are familiar with this series, there will be many things that are familiar; the will they/won’t they of Cormoran and Robin’s relationship, the stump where Cormoran had a leg amputated playing up at critical moments and the pair’s other relationships which seem to impinge on the story to varying degrees.

Whilst much of the action in the story takes place off line, there are plenty of online elements, the largest being the chats held by the moderators of the animation game. Slowly, it becomes clear that Anomie is more than he/she suggests and starts to cause mayhem and upset along with a couple of murders. There is a lot in this book – the far right, obsessive fans, artistic communities, hate campaigns and trolling. I enjoyed it but have to admit that I found the online chats too hard to read and at one point turned through a large chunk of pages and then continued to read and it didn’t really affect my understanding of the story. One to get from the library rather buy your own copy.