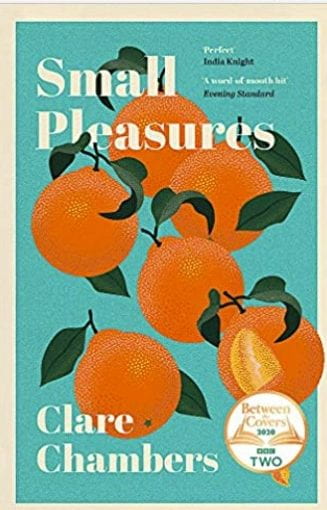 This was our latest book club choice and is the second time I have read it, this time being much more positive than the first time. It just goes to show that for me, slowing down and thinking about a book as I read it can change my opinion.

Anyway, set in 1957, local paper journalist Jean lives with her mother in genteel poverty – in fact not just financial poverty but emotional and happiness poverty too. A woman writes in to the newspaper following an article about parthogenesis to say that her daughter was the result of a virgin birth and inviting them to contact her to find out more. The rest of the story details the effects this has on both the family and Jean’s life.

This is a story of duty and unfulfilment with the way out of this predicament as unforseen to both parties as the miraculous virgin birth when really the miracle was that happiness could be found even when you are a frumpy 40 year old. The chooser of the book has come up with some great questions and I have had a go at answering them before we meet just to try and arrange my thoughts about the book.

Do you understand and sympathise with Jean? What made her believable?

Jean was a woman who lived a small life, kept small by her work, her mother, living a life of set routines and habits such as thursday night being hair washing night. She dutifully cares for her mother who is the type of woman who likes to complain and hold the moral highground and who can not let her daughter go.

Whenever Jean pictured Duty it was as a woman, tall and gaunt, with long hair scraped back into a bun, and grey, drooping clothes. For some reason she wore a pair of men’s lace-up shoes, the better to kick you with, perhaps.

Spinsterhood trails through the book and it is only eventually revealed that Jean became pregnant and had to terminate the pregnancy in an earlier life and is now paying the price for previously having a bit of get-up-and-go. This also explains the duty Jean feels to Margaret, the child who was the the result of the virgin birth.

But Jean knows there is more to life than her current predicament and as a result takes great pleasure in small pleasures all of which helps her to be a very believable character. I do think what works so well is the fact that she does conform to a drab spinster with a restraining mother at home and so it is something that we are quite familiar with especially set in the 1950s when conforming to social norms was expected and you were an outcast, even if only in your own mind, if you didn’t. We have glimpses of her inner life, not just her outer life and so she is a much richer character rather than the one shade of grey. She answers Carol Shield’s critical Stone Diaries about a woman who has no reported interior life and therefore we do not know her even after having read her biography

How is Jean trapped by caring for her mother and how could she escape the obligation she felt? Are there other examples of people living bound lives?

Jean’s mother is a passive woman waiting for everything to be done for her. The social shame she felt when her husband left her meant that they had to move. It wasn’t far enough though, and when she had bumped into an old neighbour she rarely left the house after that. She has no income so she is reliant on Jean for everything financial, the £20 she is sent at Christmas time from an old relative being the only money she has to spend on anything that is not a necessity. She is totally reliant on her daughter for her small pleasures such as a bowl of strawberries for pudding or her daughter to read to her in the evening. Her daughter cooks and cleans, does the garden and goes out to work and parcels up her time in order to feel things: Jean had half an hour to collapse heart broken whilst her mother was upstairs getting ready for bed.

Jean wasn’t the only bound character in the book though. In a different way Howard and Gretchen, she of the virgin birth and her husband, are bound together in a marriage that is a sham through Margaret the daughter of Gretchen. When Gretchen does break out of the marriage she ends up realising that she has made a mistake – so in many ways the mesage from the book is be grateful for small pleasures as they may be all you have. Howard is bound by his niceness and his duty towards Margaret who he thinks of as his daughter.

How do you define small pleasures and do you share any of Jean’s? If there were not enough, what was missing? Why is Small Pleasures the title?

I always think of small pleasures as those things that offer a ray of light in a hum drum or dismal day. Sometimes we get so caught up in the totality of the day we forget that actually there were moments that were different. Nowadays, people who are depressed are often asked to complete a gratitude journal and these things that you reflect on at the end of the day that you are grateful for are the small pleasures that you may not have noticed at the time. Doing this is meant to change the neural pathways and to establish small pleasures that indicate that the whole day was not grey – looking for the postive.

At one point when viewing Martha’s paintings, she was interviewing Martha to establish the authenticity of the virgin birth, she notices that

In each of the scenes a tiny detail provided a note of beauty or optimism among teh greyness – a delicate flower growing in the crack in a wall; a rainbow in an oily puddle; a bird nesting in a ruined chimney.

I cant help but think that the overall message of the book is take your small pleasures when you can because the big pleasure may never arrive and that is a bit depressing.

Did Chambers manage to convey the time and place and if so, how? Anything else about the writing.

I thought the time and place was very well conveyed, mainly in the level of detail included, things such as Howard gardening in his shirt and tie just like my Grandad used to. The annuals in straight lines in narrow borders around the grass, all of the suburban elements and the food eaten. It really was a total immersion in the time.

Her mother, opposite, was crocheting another lace doily, the porridge-coloured circle turning and growing quickly under her hands like potters’ clay. They had dozens of these at home, little puddles of string under every vase, and lamp and ornament . . .

The depiction of their time in a bed and breakfast on holiday was straight out of the playbook, no one talking to each other, rain, dreary food and when not raining, trips out on the coach and ice cream in the form of a block of ice cream sandwiched between two wafers. Again, this was a stereotypical place, it was one I had met before in many books but I see this in a positive light and it provides the comfortingness of the read. Having heard Chambers talk about her Romcoms that she normally writes, I can see many elements in this book. At the end of a session if any of us have questions we can ask them. One of mine might be: Can you see elements of romcom writing in this book? My other question would be: Why was this book only on the longlist and not the shortlist as well for the Womens Prize in 2021?