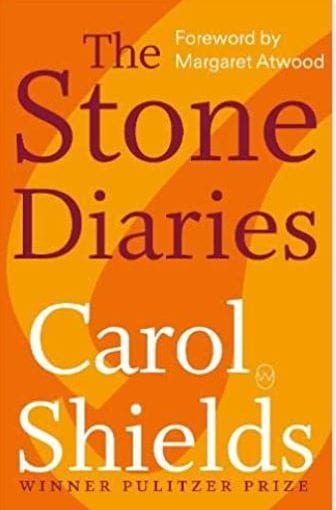 This is an absolutely fantastic book, a Pulitzer Prize winner, included in the Jubilee Big Read, The National Book Critics award and the Governor’s Literary Award, both Canadian, and it is no surprise. I have to say it is a book where I feel the author is playing with us for a purpose and that this reveals itself over time.

At its most bland, this is a diary of Daisy Goodwill-Flett spanning her whole life, dipping in and out every 10 years or so. But whilst this book is chronologically organised, it doesn’t feel like a diary to me. Usually, in a diary you find a consistent 1st person narrator but this book flips between 1st and 3rd person both in the form of Daisy and then someone else who we don’t know in the 1st person. There are letters between the main relatives and then when Daisy becomes depressed and unable to get out of bed, we have the point of view of those who knew her – friends and family. There is also an ‘I’ narrator that is not Daisy – in fact is any of it Daisy? In Illness and Decline we find the following:

She’s lost track of what’s real and what isn’t, and so, at this age have I.

So who is this I? Someone else who is a little older and forgetting things. A friend?

Whilst Shields mentions in the afterword that she dipped into Daisy’s life every 10 years or so, each of these times is a transition in her life – her birth, leaving the woman who looked after her to go and live with her father again, getting married and so they are times of uncertainty when we might need others to help us through them. I wondered if either the 1st or 3rd voice was more reliable as a narrator than the other but it wasn’t it was just a different point of view.

She understood that if she was going to hold on to her life at all, she would have to rescue it by a primary act of imagination, supplementing, modifying, summoning up the necessary connections, conjuring the pastoral or heroic or whatever, even dreaming a limestone tower into existence, getting the details wrong occasionally, exaggerating or lying outright, inventing letters or conversations of impossible gentility, or casting conjecture in a pretty light.

And that is exactly what the book does in an effort to hold onto a life that seems unremarkable, maybe to men, but is what many women lived through. There is a direct line from this book to Tracey Emin’s My Bed which is an autobiographical look at a moment in time, seemingly mundane, in her life although told through only one set of eyes. Included in the displays were videos and one is of a woman curled up in a foetal position with the sound track of one long scream. It speaks of abuse or trauma and requires no words to be ‘read’ but in Shield’s diary words and language are very important. Words are often referred to in terms of whether characters have them to speak or not. Daisy’s father, Cuyler, found his words when a ‘stone was dislodged from this throat’ and came out endlessly, speaking words of endearment and love for his first wife. When Cuyler meets his second wife who only speaks Italian

His own tongue is suddenly stilled.

It is through all these words that a life story is created, exaggerated and invented – they are the constant in this story and are used by all to share their perceptions. Language is used to carve out a life just as stone runs through the book and is carved to reflect life. Cuyler decides to build a replica pyramid after he came home from a cruise along the Nile with his second wife and underneath it buries a box with mementos from his first marriage. He was told to keep the wedding ring of his first wife to give to his daughter but feels that he can’t imagine doing so.

Speech and gesture would not suffice, not in the thin ether of the world he now inhabits. Far less troubling is to bury this treasure beneath a weight of stone – his pyramid, dense, heavy, complex, full of secrets, a sort of machine. His statement of finality.

Is this a life story buried beneath a weight of stone? Set in stone? Although nothing in this story is set in stone because there is real blurring between fact and fiction and I can’t tell where one ends and the other starts.

Just to really confuse us, there is a set of photos – in my book at the end but in others in the middle – that show the family. However, Shields has said in interviews that she found these photos. Some are of her family and some found at fairs etc and she has no idea who they are. So again she is playing with the blurring of the boundaries. The photos add a sense of realness to the diaries but once we know where they come from we don’t know what is the truth. The picture that is supposed to be her parents shows a woman who is larger than the man but not obese by any stretch of the imagination so which is true – the photo or the diary? Or neither? In fact, in the photo it looks like a mother and son not a husband and wife.

I wonder if this book is saying that a woman’s story is never her own, told by others and can be weighted down by stone or kept trapped by a heavy weight. (I’m not sure what this heavy weight is – social expectations? Like a millstone around her neck?) The only time when she seemed freer was when she was writing her column and maybe that was why she took to her room with such rage when it was taken away. Is Shields saying that you can never really know another person?

I look forward to the questions we are going to discuss about this book and will add them with my thoughts to this post.

Questions for our book club discussion

1a. The first chapter of this novel is the only one that is narrated entirely in the first person, i.e., Daisy’s point of view and at some points, the book returns to the first-person narrative “I”.  Other parts are in the third person and when that happens, who do you think is telling Daisy’s story?  Why might the author have chosen to shift narrative voices?

b) The author uses a variety of conventions to tell Daisy’s story, e.g., letters, lists, etc. Did you find these added to your interest and enjoyment of the novel?

2. Please choose a passage, sentence or phrase that you particularly enjoyed and share it with the group.

3a. This book is framed as the life of this so-called “ordinary” woman. But in it, there are layers of complexity beneath the surface. In your opinion, is there such thing as an “ordinary” woman?

b. Why is there so much precise detail given to what could only be called mundane subjects?

4. From the passionate Cuyler Goodwill to Barker Flett, who is smitten with Daisy while she is still a child, the men in this novel are both erotically enthralled by women and fulfilled by their relationships with them. In contrast, their wives seem bewildered by, indifferent to, or at best tolerant of their husbands’ ardour.

a. Does The Stone Diaries undermine the power and authority of traditional sex roles?

b. Where do Daisy and the novel’s other female characters derive their greatest pleasure and fulfilment?

d. How deeply does Daisy seem to love either of her husbands?

5. When Daisy loses her first husband, she never tells the story to another soul. What might account for her reticence?

6. “Life is an endless recruiting of witnesses.” This observation in the first chapter seems borne out by the constant stream of secondary characters who intrude into Daisy’s life story and at times commandeer it. What role does Daisy – or Carol Shields – assign “witnesses” like the Jewish peddler Abram Gozhdë Skutari, the bicyclist who kills Clarentine Flett, or Cuyler Goodwill’s housekeeper? Why do these characters reappear in the narrative years after their initial entrances? How trustworthy are their interpretations of Daisy’s life and character?

7. Even as small children, Alice, Warren and Joan Flett “take turns comparing and repeating their separate and shared memories and shivering with pleasure every time a fresh fragment from the past is unearthed.” What role does memory play in The Stone Diaries? How much of Daisy’s diary is remembered, and how much is imagined?

8. In the chapter entitled “Sorrow,” a number of characters offer explanations for Daisy’s depression. How accurate are any of these? Are we given any reason to trust one interpretation over others? How well do any of Daisy’s intimates really know her? How well does the reader know her by the book’s close?

See part 2 here for my thoughts after discussing the book.