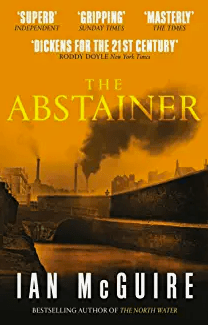 This is one of those books I picked up in the library off the returns shelf – always a few good books on there and it was good. Set in the 19th Century in Manchester this is the story – elements based on real-life – of a cat and mouse chase between a policeman and an American Irishman, Doyle, who is part of the Fenian Brotherhood. The policeman is also Irish and hated by the rest of the police force.

O’Connor, the policeman, is the abstainer partly because he was an alcoholic but also in other ways. He abstained from relationships after the death of his wife but the abstention in the title really only makes complete sense when you get to the end.

The book is very well written but I have to say the first couple of thirds did feel like a Peaky Blinders series when the policeman was sent to Birmingham to catch the Irish Republicans and Tommy Shelby. It wasn’t a new story apart from the ending where O’Connor ended up in America still chasing Doyle.

The setting and times were very well described and you really did feel as if you were in the 19th Century Manchester with the opening setting the scene of three Irishmen being hanged even though they may not have been the guilty ones. Prejudice runs throughout this book as does violence and death but there are moments of humanity especially from O’Connor with his abstention at the end being the greatest sacrifice and redemption.