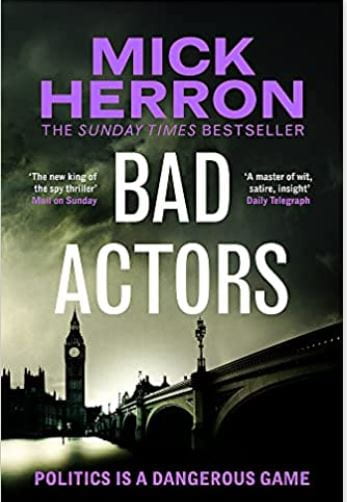 This book made me laugh out loud as the Slow Horse series continues with yet more chaos, killings and comedy. In fact there are various points where i wondered whether I was reading a comedy or a spy novel – perhaps the book is both and necessary in these times. Perhaps it it the anti-spy novel’s right to be what it wants.

New characters to the on-going story are the special adviser to the Prime Minister who takes all the meetings and controls the situation.

This performance was largely due to the Prime Minister himself, whose sole qualification for the job had been the widespread expectation that he’d achieve it. Having done so, he was clearly dumbstruck by the demands of the office: the pay cut, the long hours, the pandemic, and the shocking degree of accountability involved. For a man who’d made a vocation out of avoidance or responsibility, this last was an ugly blow. . . the man’s character had been evident for decades, and people still voted for him – but it mattered that, as a consequence, the PM had come to rely on a series of advisers whom no one had voted for. And ‘rely on’ was putting it mildly.

No, No, Mick. Tell us what you think!

The book is a commentary on the recent political goings – on according to Herron and is amusing to read now when the political aspect is current – or the tail end is but I don’t know if it will stand the test of time.

There is a plot – a superforecaster who works for the special adviser disappears and a Russian who is the equivalent of our First Desk slips into the country and then makes himself known. Lady Di Taverner – our First Desk – has to disappear and sort out the mess and of course only the Slough Horses can save the day in their usual chaotic manner. In fact, there is chaos but not with Lamb the leader at Slough House who always seems to be one step ahead of everyone despite the amount of time he sits in his office smoking and farting.

I loved the book and all its slippery, twisty ways of not being a spy story. Even the opening has you wondering what you have picked up to read:

The wind with its hands in its pockets, whistles a tune as it wanders down the road – a jaunty melody, at odds with the surroundings – and the theme is picked up by everything it passes, until all of Aldersgate Street, in the London borough of Finsbury, has joined in.

And that is just the first sentence. The description then moves onto the sounds, the percussive beat of the litter and so it goes on for a page and drops you off at the front door of Slough House.

This is a chameleon of a book and I loved it.