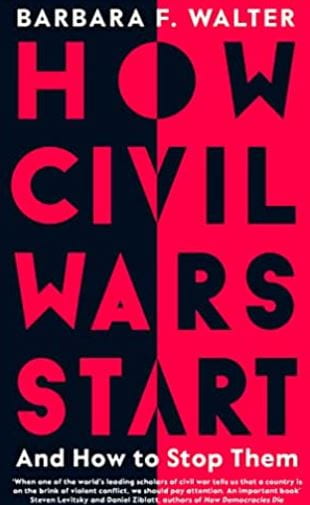 What a fantastic and very readable book. Absolutely fascinating and well written and not something I knew an awful lot about.

So, how do civil wars start?

Walter goes through 5 key elements exploring and explaining with examples and of course there is so much in here that resonates with where we are at present.

If a country is moving towards or from a democracy to this middle zone between the two this is where most civil wars start. There is the Polity scale which rates countries on lots of factors and those that end up in the +5 – -5 are in the middle and are known as anocracies: neither autocracies or democracies but with elements of both. For instance the country may have some elements of of democracy such as full voting rights but no checks or balances on their leaders that have full authoritarian powers. Anocracies can also be known as illiberal democracies such as Turkey. This is the danger zone because often the leaders are weak in the face of injustice and can not manage the new winners and losers in the system. The UK slipped from +10 to +8 in 2016, America slipped to +5, the danger zone, at the end of Trump’s presidency and remains there.

When Saddam Hussein was captured, researchers who study deomcratisation didn’t celebrate. We knew that democratisation, especially rapid democratisation in a deeply divided country, could be highly destabilising. In fact, the more radical and rapid the change the more destabilising it was likely to be. The United States and the United Kingdom throught they were delivering freedom to the a welcoming population. Instead they were about to deliver the perfect conditions for civil war.

The development of factions or small, organised dissenting groups. Most political parties have them – think Nigel Farrage! But factions can also follow religious, ethnic and race lines and identity-based politics or factionalised politics often has rigid boundaries and are intransigent and inflexible. This did make me think about Northern Ireland.

You can get superfactions where groups share more than two criteria such as ethnicity, language, religion, and here you are more likely to have a civil war if there are two dominant groups

Groups who are excluded from power. People were more likely to fight if they once had power and saw it slipping away or what is known as being ‘downgraded’. This idea is used to predict who is most likely to initiate violence – Trump and his supporters on Capitol Hill. Other downgradings can be:

If a country was already at risk of civil war, natural disasters tented to make things worse. In a world where drought, wildfire, hurricanes and heat waves will be more frequent and more intense – driving greater migration – the downgraded will have even more reasons to rise up

Loss of hope particularly when it is understood that peaceful protest won’t work.

An accelerant is needed and often that is social media. This works by

Are there ways to stop civil wars? Yes, but sadly this section of the book is tiny in comparison with what starts them. What we need are:

This book is quite a sobering read. It ends with Walter and her family considering leaving the country (America) but deciding in the end to stay – hope! But they did renew their passports!