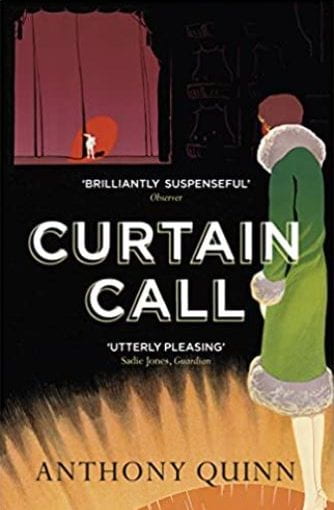 The essential purpose of writing must be to please.

And please, this book did. Set in the 1930s conjuring up the time with parties, prostitutes, homosexuals and a theatre critic, the book is less a crime novel more a telling of the times and reads as if it had been written in the 30s.

A string of murders of women by someone who pierces them with a tie pin takes place around the theaters of London. On the second attempt the murderer is disturbed by an actress, Nina Land, who is in the hotel meeting her lover, Stephen Wyley the artist. Eventually they realise what Nina saw and by chance meet up with the victim, Madelaine Farewell (there’s a name) and decide to go to the police to let them know what happened. There are difficulties though and so they are not believed.

Meanwhile, running through the story is James Erskine, a theatre critic and a larger than life character, who is rude and obnoxious to most people including his secretary Tom Tunner. There is most definitely a whiff of Jeeves and Wooster about this pair. Really, I am not sure what Erskine has to do with the crime and the solving of it but the book revolves around him and his treatment of Tom who is his essential dogsbody.

This is not a crime novel with a detective out to solve the case – somehow the crime is solved without anyone trying to do that and life seems to go on for everyone whilst this is happening. It does however, have a happy ending and also a just one for the murderer.

He sometimes has the sense of being a stoker, shovelling his words into a white-hot maw kept consuming, demanding, consuming. As fast as he wrote them, they vanished into flames.

Brilliant traffic was bunching and growling, spurting and halting in broken processions, eager for a way out.

I can just picture the busyness of the road as the theatres empty out and people heading off home. I am slightly perplexed by the word ‘brilliant’ in relation to traffic – is it the way the headlights shine that it refers to?

There were new words such as steatopygous which means to have excess fat on the buttocks! And, acronyms which have since passed into our language and changed meaning, the most notable example being ‘naff’ or not available for fucking. Now it means tat or poor taste but that isn’t how it started off.

It says on the front cover of the book I borrowed from the library that it was read on BBC Radio 4. I bet they didn’t read out the part about the tankard and the whiskey. This was quite a shocking episode and I am not really sure why it was included. Much of the loucheness of the book reminded me of books written about Berlin before WWII where there was a large gay scene which some (Hitler and his cronies) saw as degenerate along with the evilness of modernity.