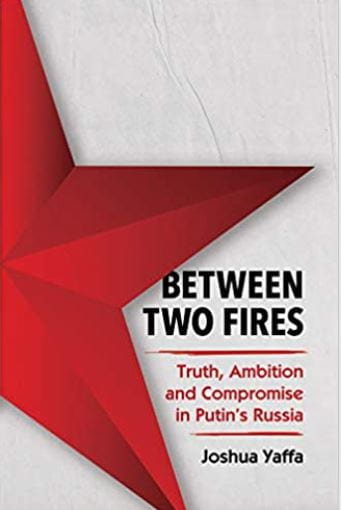 I am not at all surprised that Between Two Fires won the  2021 Orwell Prize for Political Writing because it is excellent. I had felt that I ought to read something about Russia and this filled the requirement perfectly.

In the prologue, Yaffa discusses the sociologist Yuri Levada’s findings after a survey of the people in 1989 where he came up with the concept of the ‘wily man’. Yaffa argues that the Russian people expect the state to be ever present in their lives but have found ways to adapt and bend around the system for their own benefits and in some cases survival. This wiliness is only usually directed upwards rather than outwards and it is this very way of being, ‘small acts that in aggregate keep Putin in power’, that keep people busy rather than coming together to change the whole situation.

What emerged from the numbers was a portrait of Russian society with a deeply contradictory attitude twards its rulers, and a rather scrambled understanding of its own role … Loyal and disobedient. Aggressive and pitiable. Proud and insecure.

The state can be a place of great hardship and incomparable opportunity – think if the oligarchs! But this is the case at all levels of society. Your role as a citizen is to adapt to endure you find the opportunities. If you don’t you are broken. And this is where the title comes in. Between two fires is a Russian saying that would equate to between a rock and a hard place or damned if you do and damned if you don’t.

Each chapter in the book looks at a person, and some of the people around them, and how they have walked the tightrope between the two fires. These people come from the some of the big institutions – Konstantin Ernst who runs Channel One on Russian TV or Pavel Adelgeim an Orthodox priest and then others from smaller institutions such as a Dr who was a charity worker or a zoo owner in Crimea. What they all had in common was the line they walked between the state and operating independently and the consequences for them which ever fire they found themselves in.

Those who found themselves in the state fire often started off independently, perhaps during the 80s when things were a bit freer or during the 90s when things were collapsing and so there was the time and space to do things differently. But eventually, a decision has to be made, often it has crept up slowly and quietly and before you know it the state is funding your work and demanding from you, in quite subtle ways, that you remember the party line. Those who survived this best, Konstantin Ernst was perhaps the most successful at being in the state fire, were able to argue their independence because it seemed like they were and nothing was ever said out loud but were also in a position where the Putin needed them as much as they needed him. Putin needed Ernst because Ernst created marvellous film especially visually and so who else would you turn to to create your promotional films for your elections?

Those who were less successful ended up paying with their lives such as Dr Eliza, a charity worker who had a Damascene moment in a hospice in Canada where she realised that death could be dignified and peaceful. When she returned to Russia she started to look after the homeless and support them with food and clothing and meet their medical needs including holding their hands as they died. Her fame grew and she started to get donations towards her work. And then the state became involved. Dr Liza eventually started running mercy missions funded by Russia to Ukraine to remove children who needed hospital treatment during the ‘war’ that Russia was not fighting with them. Her original supporters became angry at seeing Putin support her work as if he was a great humanitarian when in fact it was his people who were causing the problem. Like so many people caught by the state, Dr Liza she couldn’t understand why people could not or would not see that to help more but different people by being state funded was better than being independent and only helping a few. The argument is: but I am still doing good. Eventually she was killed in an airline crash.

Those who moved to the independent fire fared little better. The zoo owner who lived in Crimea publicly supported Russia taking over the area only to find that he was hounded by bureaucracy and petty officials saying that he hadn’t met all the conditions for importing animals or their food and so the zoo was closed. Or the couple who opened a museum that used to be Perm-36 prison. They became a little too political, the local politician changed and they were kicked out of something they had built from the ground upwards only for a technocrat to take over. Someone who had little relevant experience but who was chosen by the state and who received funding for the museum from the state. Bit by bit, uncomfortable history was glossed over – not removed – without the true horrors being shared. And others, such as the Orthodox priest. Well, he was killed by a young man who was whisked away to prison and never seen again. But time and time again, the state uses others – individuals and groups, to do their work for them.

Success is a ‘dance of compromise’ in Russia and the compromises that people in the book had to make were gnarled and knotted such as working within the party and having some effect or having no effect and being silenced when working outside it. I found the television examples quite unsettling particularly in relation to the times now when Russia is at war with Ukraine. When speaking about what was heard on the television a woman said:

…she did not believe the hollow propaganda shown to her, but was presented with no alternative way of understanding her life and the world around her.

Ukraine featured quite heavily in the book although it was written before the current war. When talking about the Russian soldiers in Chechnya some were described as

…outright sadists, murderers; many more were simply canon fodder used without thought or care by inept and cynical generals.

Now, where have we heard that before?

If you are looking for a book that helps you to understand what is going on in Russia, this is it.