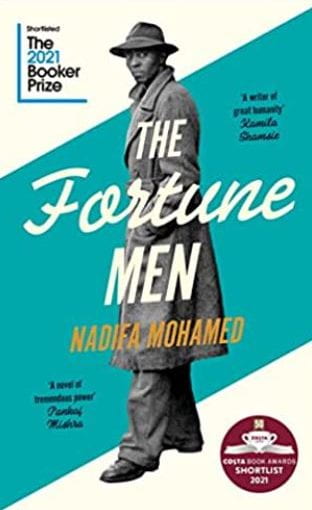 The wrongful conviction and execution of Mahmood Mattan became the first miscarriage of justice ever rectified by a British court, but the harm it had caused to his family could never be undone.

They think a man stupid because he talks with an accent, but he wants to shout ‘I teach myself five languages, I know how to say “Fuck you!” in Hindi and “Love me” in Swahili, give me a chance and speak plain.

The Fortune Men is a true story fictionalised which makes it a very powerful read. This article gives a good overview of the facts of the case. Nadifa Mohamed has taken the events, used transcripts from the courts and layered a life of hardship, poverty, unemployment, low-level crime and most of all racism onto these facts and rounded out the lives of those involved with day to day living and emotions.

We see the event from the family of the murdered woman, who owns and runs a shop in Tiger Bay, Cardiff’s port, a multi-racial area of Somalis, Maltese, Germans, Jamaicans and Welsh where differences were tolerated but within a wider colonial society that was narrow-minded and where the police thought nothing of framing a person because they were ‘difficult’. But we also see the story from the Mahmood’s point of view and his wife Laura and it is between these two that we see the difficulties and obstacles to be overcome in a mixed-race marriage.

Some of the most moving parts of this story were the final parts where Mahmood was in prison and returned to his faith to help see him through the days. He reflects on what he left in Somali and the brutal nature of the judicial system and a belief that has been shattered. Not everything is the best in the UK and we see this through his eyes.

In Hargeisa, where sunset meant genuine darkness, you could track the slow movement of stars and planets, glittering and pulling you up into a depthless, shifting sea with its coastline of purple, indigo and black stretches. God reminds you through those night skies of how small and insignificant you are, and speaks to you clearly, his anger and solace are tangible in the rain he sends or withholds, the births or deaths he orders, the long, waxy grass he gives or dead, broken earth he carves. The miasma above the prison, above Cardiff, suffocated Mahmood’s faith and separated him from God.

This is a sad, sad story but all the better for being brought into the light now. The book was shortlisted for the Booker Prize in 2021 and I think is way better than Damon Galgut’s The Promise and I wondered why it didn’t win. One of the reasons may be that the victim’s family, Diana and her daughter Grace, didn’t really appear in the last third of the book, other than the court transcripts, and so we don’t know how they felt after the execution and when the trial was deemed to be a miscarriage of justice. They seemed to be let go as we moved our gaze to Mahmood and his life. Perhaps this was because although they are the victims of the crime, the victim of British justice and society was Mahmood.

I also wondered why the book was called The Fortune Men. At its simplest idea it might be because the Somali men went off as sailors for months on end, earning and looking for a fortune to take home to their families. It might be because Mahmood always saw himself as lucky or fortunate up until his 20s and even later on when he married and had three boys. The Fortune Men sounds like men going off to seek something but this was denied to Mahmood when he was imprisoned and executed.

They are blind to Mohamood Hussein Mattan and all his real manifestations: the tireless stoker, the poker shark, the elegant wanderer, the love starred husband, the soft-hearted father.