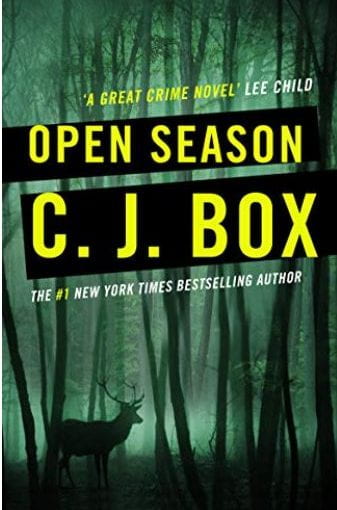 I was looking around for a new detective series and came across C.J. Box’s Joe Pickett series as one to read. I got the first book, Open Season, from the library and it is good. I imagine C.J. Box is a Wyoming man and has strong views about rural life and endangered species of animals because the book certainly does.

Pickett is a game warden, one that has a strong moral compass, a bit clumsy, doesn’t like shooting people and is a strong family man – the antithesis of many detectives nowadays where they are all a little flawed in big ways. A man dies on his property and he starts to investigate which leads him onto other crimes both against people and wildlife. In the process, his wife is shot, they lose their baby and people he thought were friends end up being the guilty ones.

The book is structured into seven parts and each part is introduced by a section of the Endangered Species Act Amendments of 1982. The reason why this is important to the story is that companies are vying to bring gas pipes across the country and evidence of endangered species would stop all of that and shut down many of the traditional hunting and shooting jobs whilst the place is invaded with ecologists and biologists and endangered species experts.

What happens is that Pickett tells people about the weasels and of course the place is crowded with endangered species experts of every type to observe the two colonies. The irony is that these people end up killing both colonies, one through a virus brought in by one of the expert’s dogs and the other colony declined for no observable reason. 400 local jobs were lost and every day there were stories of families handing in the keys to their house and leaving town.

There is, however, a third colony of weasels which no one else knows about.

“I think there are a lot of people who say they do things for animals when really they are doing it for themselves. They see things in animals that might not really be there. I think this sometimes hurts the animals in the end, and it hurts other people, too.”

Sheridan thought it over. “Transference,” she repeated.

“There are people on both sides of the issue who think animals are more valuable than people are,” Joe said. “That’s what’s happening here.”

I am off to see if I can find the next book in the series, Savage Run.