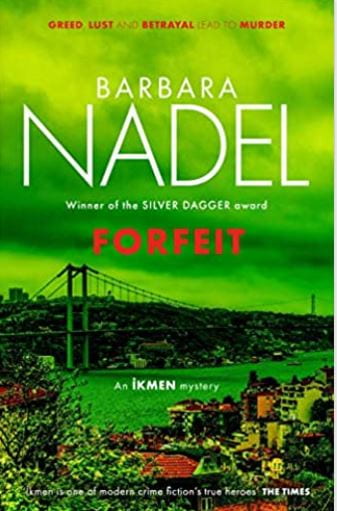 I have read many Ikmen mysteries by Nadal so was delighted to find one I hadn’t in the library. Forfeit was published in 2021 and is Nadal’s 23rd book in the series.

At the heart of this book is the death of a Turkish TV star Erol Gencer who was found alongside another dead man. Whirling around these deaths are the elements that make these books so good: the conflation of traditional and modern Turkey, the recognition of the dead and spirits such as djins, trans and gay people in Turkey alongside Romany people and in this book Syrian refugees, Syrian secret police, Bashar al-Assad and the role of story-tellers. This is the darker, underbelly of a place and its people.

This is a story of loyalty and betrayal and many pay a forfeit for their deeds.

But the truth was actively hidden,’ Sami said. ‘And that’s a bad road to walk along. That’s Assad’s road.’