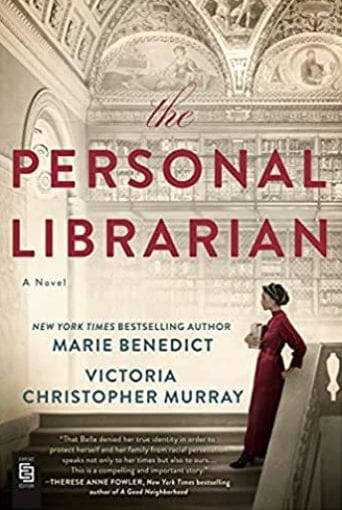 This is a remarkable story about Bella da Costa Greene who became J.P. Morgans personal librarian. Bella wasn’t born Bella and she has more than one secret that she carries for her whole life. Number 1 is that she is a Black American passing as white and all the stress, isolation and trauma that brings along with it and number two, she became pregnant and had an abortion with a man that she loved deeply but who abandoned her.

Bella’s parents separated over the fact that her mother ticked the ‘white’ box on the census that was out that year and her father, a civil rights and equality activist, just could not accept that she did this. Her argument was that with Jim Crow laws, rising tensions and segregation it would be much better for their children if they lived in ‘white’ worlds because they could all pass. When working, Bella met a Morgan family member who loved old books and art as much as she did and introduced her to J.P. Morgan who had just built his own library but needed someone to help make it into a world class collection. That someone was Bella.

Her mother’s advice was that you should always blend in and be un-noticed but what Bella learns is that it is easier to hide in plain sight and so become more colourful in her clothing and behaviour. She is a quick learner both socially and academically and travelled to purchase and collect books for Morgan, outbidding and out-conniving this male dominated world.

After Morgan died, it took her sometime to convince Jack Morgan that the collection she had put together with the families money be donated and open to the public to come in and look at and use whenever they wanted. A fantastic achievement when he finally agreed.

I really enjoyed the ideas and life of this dedicated and loyal woman who overcame so much. The story is structured chronologically but is not the writing that you would find in a diary or journal and sometimes it doesn’t quite work. The writers had to do some educated-guess parts where documentation does not tell us exactly what happened and it is sometimes in these parts and sometimes when an opinion is given that the writing doesn’t feel like a story and doesn’t feel like a diary.