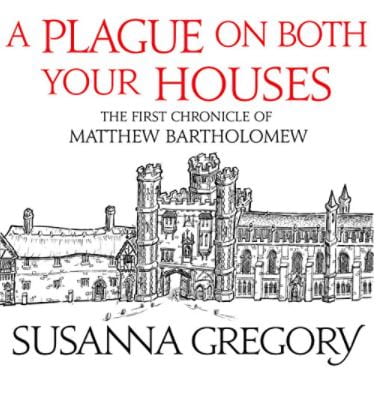 I like to have a series on the go just in case I can’t find anything else to read and then I can go to a list of the titles and choose the next in line. This is why I have started to read the Matthew Bartholomew Chronicles in order – I have read some of them before but will reread – spanning being published from 1996 – 2021.

When and where is the story set?

This series is set in medieval times, 1348, during the time of the bubonic plague which wipes out a large proportion of the population. The plague is the backdrop to the story and provides cover for some of the many killings that take place in both Oxford and more importantly to the story, Cambridge with the ‘town and gown’ tension used as a ruse. This time has been called ‘The Dung Ages‘ and there is certainly an element of this in the book. At one point in the story, Bartholomew has to climb up some ivy at the back of a house to listen in to what is being said. During the course of this passage we meet foul smells, a deep layer of slime that makes the eyes water, skidding on something slippery, a rotten slab of meat, the slop drain and all manner of kitchen waste and other unspeakables that have been thrown out of the back windows into the courtyard below.

Bartholomew lives in Michaelhouse, a college of the university, which is in fact a real one that existed until King Henry VIII has his way in the 1540s.

Who is the detective?

Matthew Bartholomew is a physician and tutor in Cambridge and something of an enlightened one for the times. He believes that hand-washing is more important (where have we heard this recently?) than drawing up horoscopes for his patients and is curious about how the plague is transmitted. He is courting Philippa, who lives in a nunnery after being widowed and who the Abbess wants to stay as a nun so that she can have access to her houses and wealth.

Is there a side-kick?

Why, yes there is! Brother Michael, a Benedictine monk who likes food and drink being, as many good side-kicks are, the opposite of Bartholomew. Throughout the book Bartholomew forgets to eat but Brother Michael doesn’t, Bartholomew hates gossip and intrigue but Michael loves it. There are however, other side-kicks who no doubt will appear in future books – Cynric who helps him listen in to conversations and provides back-up when needed and a new student, Gray, who has many lying, cheating skills that Bartholomew doesn’t have.

Summary of the story

Bartholomew is drawn into a series of deaths in the college and is warned several times not to get involved. These deaths are made to look as if they have occurred because of a tension between the town and the university and between the universities of Oxford and Cambridge. However, in the end it boils down to someone’s desire for power as a bishop.

A list of titles with links to a review and stars