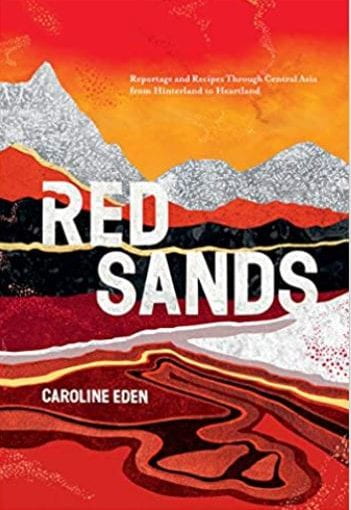 This book won the 2020 André Simon food and drink award which somehow in my head equated to recipe books, many of the shortlist were, but Red Sands is more about places and food than recipes and for some reason I wasn’t expecting that. Caroline Eden is a journalist/writer and it shows in the way this book is structured and what is included.

The book focuses on the ‘stans – Kazakhstan, Kyrgyzstan, Tajikistan and Uzbekistan – in quite a timely way. The writing is almost a eulogy to a way of life that is fast disappearing and its past so entwined with Russia. Progress in the form of tourism is taking over in many places and in others were there are rich deposits in the land, the desire for these takes over. The book focuses on spring and autumn presumably because it is so hot in the summer and most of the food is grown during these times and it tells of a journey during these seasons, the people she met, places she visited and the food that was eaten.

At intervals throughout the travelogue, recipes are shared for food that inspired and was delicious such as non bread stuffed with raisins and walnuts, plov and kimchi. The food was a melting pot inspired by Korea, China and Russia and many of the people Eden met being Muslim, she was invited to share this food many times. The recipes are there to help connect the place, the atmosphere and the writing.

It was interesting to see Russia’s legacy writ large over many of the areas visited – abandoned trucks, buildings and in some cases people.

Behind the kitchen lay the skeleton of a rusting Russian truck, baked by the sun. Stripped of any value, it had no roof, no windows and no wheels. Ruinously pretty, it looked like a piece of art that had been carefully wedged in the sand by a band of guerrilla artists.

To help, Eden was accompanied by books from Isabella ‘Ella’ Robertson Christie, who travelled to Central Asia in 1910 and 1912; and John Wardell, who arrived in 1914. It helps to compare and to hear other voices about a place particularly when in this day and age impressions and atmosphere are what we want/need especially during lock down. We may not be able to visit but in our heads we can picture and imagine and so facts and information about how to get to places are no longer necessary.

There are lots of images in the book that enhance each of the essays, but two that stood out for me were the following:

The camel is from an essay entitled Oil Fields and is a wonderful representation of the desert ships of then and now with the oil fueling the progress and carrying the country forwards. The picture of Nur Sultan represents the past, present and future with the brutalist concrete buildings from the near past, maybe Russian influenced, the present with the change in name of the capital of Kazakhstan and then that futuristic building, the Bayterek Tower, seen through the arch. What is it about globes on top of towers in ex-communist countries? I remember going up what was lovingly called The Spring Onion, or TV Tower, in East Berlin. In Nur Sultan the globe and tower are symbols or an egg in a tree lfrom an an old myth about new beginnings and symbolises 10 years independence from Russia.

Would I make any of the recipes? Well I would try Vladimer Lee’s Kimchi as I am rather partial to kimchi, but really that isn’t what this book is about.