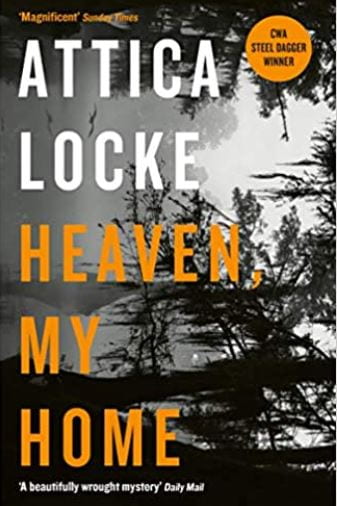 Oh what a joy to read a book that is only 292 well-edited pages that rolls along at a clip and that is quite hard to put down. Heaven, My Home is that book and I loved it.

This is the second book in the Highway 59 series, the first Bluebird, Bluebird was excellent and I hadn’t been aware that there was a second book out in 2019 (surely time for a 3rd now?).

In an article in the Guardian, Locke writes

And in my novels, it occurs to me how often the tangible, bloody crimes at the centre of these stories are almost always masking larger crimes about land use, land ownership, and the power bestowed by each.

because Locke believes that land is power.

The books, this one included, document race relations in America, particularly Texas, and what it means to have a leader who signals to white supremacists that they are OK. Think Trump and his phrase to the Proud Boys, ‘..stand back and stand by.’ The book is set during the Trump presidency and reflects on the betrayal felt after Obama left office.

The lead character is Darren Matthews, a black Texan Ranger who has marriage problems, morality problems, a mother who blackmails him and is not always sober. Despite all of this, he is asked to go and report on race relations in a case where a young white boy has gone missing, a child of the leader of the Aryan Brotherhood and in prison, and the last person to see the child was an aging black man who owns land. This all happens in Hopetown, East Texas, a place where slaves swam to freedom after a steamboat sinking and hid out in plain sight and where their ancestors still live cheek by jowl with free-loading, white neo-nazis. Also on this land are Native Americans from the Caddo tribe.

Entwined in this book is Matthew’s friendship with Greg, an FBI agent involved in the case in an attempt to prove to the Trump leadership that the FBI is in the ‘right’ place politically (how did that work out for them?) and of course the investigation strains his friendship to the limit.

But a gulf had opened up between them. After twenty-some years of friendship, had race finally dumped a swamp of quicksand at their feet, making it impossible for either man to reach the other without the threat of losing himself in the process? or were they just doing their jobs the best way they knew how?

Heaven, My Home by Attica Locke

The key to finding the child is to find out what is happening to the land and who owes whom what. This is a fight to take back land and find a home and at the end of the book the Caddo get their land and Matthews returns to his family home without his wife.

And he shall be like a tree planted by the rivers of water, that bringeth forth his fruit in his season, his leaf shall not wither: and whatsoever he doeth shall prosper.

There is a lot about justice, forgiveness and grace in this book. Locke sees forgiveness as a foundation for progress and Trump as forgiveness betrayed. Matthews works hard at forgiving his mother and his wife although both lead him to do things he doesn’t really want to do. But the biggest betrayal comes at the end where an old black man that Matthews is protecting from being accused of murder reveals the true story and his home-made justice is betrayed.

This whole time he thought he was saving an elderly black man who had seventy years’ worth of justification for shooting a white supremacist threatening his granddaughter on his property, but in fact he was protecting a millennial black girl who was putting out to get weed from a man who called her a nigger.

It sets the next book up well!