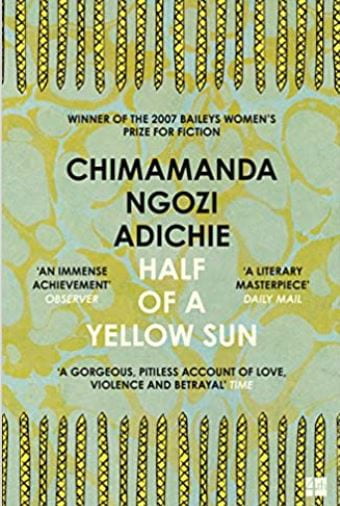 I remember as a child seeing photos on the news of starving Biafran children many miles away and for people of my generation, these were the defining images of Africa at that time. The word Biafran was synonymous with starvation in my mind but now I know it is derived from two Igbo words, Bia meaning ‘come’ and fara meaning ‘live’. Although the story took place in 1967 – 1970, the desire for people from the East and South of Nigeria to be a separate identity continues today with many of the problems Adiche wrote about such as poverty and corruption leading to political unrest.

Adiche states at the end of the book that every single event is based on something real and so her depiction of war has a reality to it that makes parts very difficult to read. I am thinking of things like one of the main characters escaping on a train, sitting next to woman and her calabash and touching it for security and comfort only to discover that it holds the head of the woman’s daughter.When I read it I thought that was so horrific it couldn’t be made up.

The story focuses on three main characters and then others that are present in their world. There is Ugwu a village boy who becomes a houseboy and gains an education. There is Olanna a middle class daughter and twin who is beautiful and educated in the UK and there is Richard, a white man from England who falls in love with Igbo art and then Olanna’s twin. These three characters are a wonderful representation of Nigeria – past and future with Ugwu and Olanna and the role of education, freedom from colonialism with Richard, and Igbo people. And whilst the book tells of their lives, the loves, betrayals, escapes, traditional versus modern in detail, it also manages to show us the bigger picture of tension and war.

Appropriately for a story about starvation, there is a strong theme of food running throughout the book. There is pepper soup, spicy jollof rice and much else being enjoyed along with Richard’s houseboy who will only cook western food and sees it as far superior to the local delicacies. But at the end there is nothing, they fill their stomachs with water and Olanna’s daughter is dying from malnutrition.

The book asks us to wait for clarity at certain points such as what did happen that weekend between Olanna, her twin and Richard. It is mentioned and is a source of great shame to Richard but we have to wait for Adiche to reveal the events so the story is not always linear.

Ultimately, this is a book about identity and what happens when there are many identities in a country and some feel that their voices are not heard. It is a problem in our world which we return to again and again, often with violence attached to it.