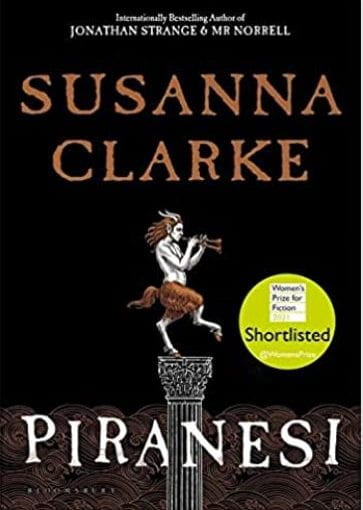 Goodness me, this is a strange book which I am still grappling with through the help of children’s literature. It is not the sort of book I would pick up and read judging by its cover; it is because it won the Women’s Fiction Prize 21 that I picked it up.

Right from the start it looks like it is going to be a fantasy story because of the faun on the front cover of the hardback I have from the library on top of a greek or roman pillar, reminiscent of Mr Tumnus in The Lion The Witch and The Wardrobe. And, then there is the name Piranesi which I did google because it felt like it might be real rather than fictional. It is. It belongs to Giovanni Batista Piranesi who created 16 engravings of imaginary prisons – very germane to the book. They are large vaulted rooms with stairs and seemingly endless.

The books starts with Piranesi in ‘The House’, a huge vaulted space with tides lapping and storming in on the lower floors, other floors with collected rainwater and then more floors with clouds. In each room are statues, some of them giant, which Piranese starts to catalogue. He has an amazing memory for each room and how to get to it. The start of the story is slow and Piranesi’s life is revealed to us. He fishes in the rainwater and burns dried seaweed to cook with and to keep warm. There is only one more person in The House who he calls ‘Other’ and who visits on Tuesdays and Fridays and gradually through his interactions with Other we begin to see how the world is not as Piranesi has described or remembered it. This reminds me so much of the children’s book by Colin Thompson, The Paradise Garden where a boy is surrounded by noise and escapes to what looks like Kew Gardens and lives there, fishing in the ponds for food, sleeping under large plants until Autumn seeps in when he returns home. He does, however, take part of the place with him as seeds in his pocket and sows them in the back garden when he gets home and always has a piece of that place with him wherever he goes. The discussion you have with children is did he really go to this place or is it imaginary? I wondered if Piranesi was stuck in his own mind – this safe, comfortable and interesting place where he could endlessly roam.

Things start to intrude on Piranesi’s life, mainly through his interaction with Other. As he rereads through his journals, he realises that he has forgotten a lot of things that he knew and that someone else is also in The House leaving messages for him. Eventually, he is asked if he is Matthew Rose Sorrenson and he has a vision of standing in a modern city. Along the way there is murder and then a flood and finally Piranesi or Sorrenson returns home. This is also like the children’s picture book The Tunnel by Anthony Browne (you can see it here) where a sister follows her brother through a tunnel into a wood where he is turned into a statue. The wood symbolises the landscape of their minds and it is only through the love of his sister that he is released and they both return home – changed.

But I have also read reviews that say this is a book about readers and books – the young reader is the naive narrator, Piranesi, where we want them to be ‘stuck’ in books. But the more we read, the better we become at it and we start to read between the lines – making a deeper meaning as reflected by Piranesi rereading his journals and losing some of his innocence. And then at the end, coming out of the book but always able to go back into them and enjoy them. I am less satisfied with this understanding of the book but only because I haven’t fully worked it out yet. This means that I think it would make an excellent Book Club discussion.

I don’t ‘like’ the book but I understand the brilliance at work here.