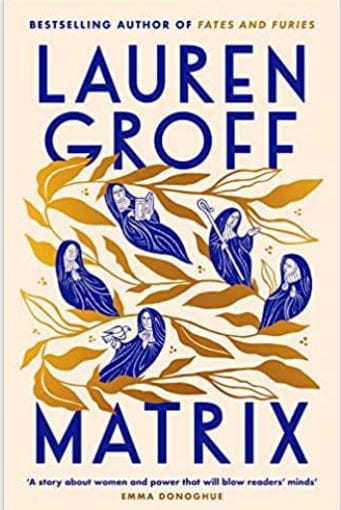 Wow! What a book. It is a tour de force and I read it in a day because I couldn’t put it down. Matrix is the tale of Marie de France, a french bastard girl sent by Eleanor of Aquitaine to a miserable abbey in England where the nuns are starving and dying of a range of diseases.

Marie is not a small, daintily dressed girl but a strong child, tall, who wears the leather belt which her mother wore on her second crusade and rides a destrier. Having landed in the abbey she eventually takes on the role of sorting it out, making it financially viable and then increasing its riches through the women she takes in. These are women with brains who are blacksmiths, farmers and inventors and they create an ‘island’ of safety which was probably much needed in medieval times.

What women can do when given a task! Their abilities seem limitless.

Marie has visions, which she records in her Book of Visions, and they show her the way forward. So, like a spider at the heart of a web, she builds a labyrinth all around the abbey to prevent others from being able to get in. Some try but Marie puts together a battle plan and sees them off with minimal violence. When the priest can no longer give communion, Marie takes it upon herself to do so, dividing the community. She sees off those who she believes to be usurpers.

A matrix is a culture where something develops, and what develops here is a community led by a woman with aspirations, of sisterhood, of lust and glory: a woman with a large spy network of her own and a woman who is not afraid to follow her own desires. But it is also an archaic term for the womb and without the first womb there would not be the first and greatest salvatrix or saviour – is that Marie?

Groff’s writing is poetic and illuminating and enable’s Marie to shine. This is a book of imagining that starts with two factual characters but takes flight on the ‘what if’ journey, and what a journey it is.

. . .Marie likes to go down to the scriptorium and change the Latin of the missals and psalters into the feminine, for why not when it is meant to be be heard and spoken only by women? She laughs to herself as she does it. Slashing women into the texts feels wicked. It is fun

And this book is fun too.

This is definitely a book for book club and these questions from Libromaniacs are excellent.