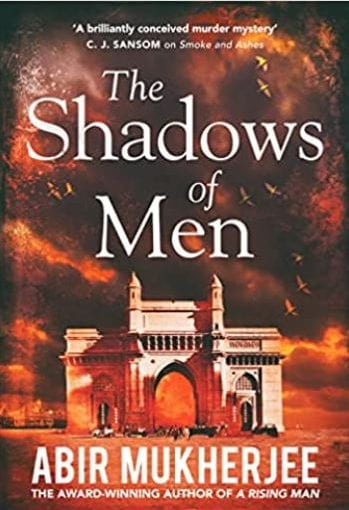 According to my Goodreads bookshelf, I read this book in September 2021 but I don’t remember it at all! And, I only gave it 4 stars and this time I think it is worth 5 stars. This is the 5th book in a series with Sam Wyndham who used to be the chief detective and Surendranath Banerjee his sidekick, but the 5 books chart the changing relationship between the two detectives until in this book they are equal and the tale is told through their two voices.

This is a very clever device because the books are set in India in the 1920s, The Shadows of Men is set in 1923, and the detectives relationship mirrors the relationship between India and the British. The book starts with Banerjee being given his first secret undercover job that does not involve Wyndham but Banerjee ends up being captured by the police and accused of murder. The rest of the story focuses on proving Banerjee’s innocence, an adventure which takes them out of Calcutta to Bombay and then for Banerjee, way beyond.

This all occurs in a tinderbox of a country where it does not take much to light the flame that sets Hindus against Muslims and where the British army’s intelligence department are split and take upon itself to set the fire going. I think Mukherjee details well Indian attitudes to the British in the form of Banerjee’s thoughts about Wyndham,

. . . communal violence, like most violence, tended to be carried out upon the poor, and that the better off, regardless of religion, generally came through the whole episode more or less unscathed.

I really enjoyed the ending, no spoilers here!, and now the books – if there are more (Oh, please yes) – have several directions they could take.

My one question about the book would be – How does the title relate to the story? I know that the book starts with the idea that men (!) are defined by the shadows they cast and that the men who have no shadows are the men who have are the most dangerous of all but I can’t relate this to the characters in the book.

This series is one of my top 10 detectives in series.