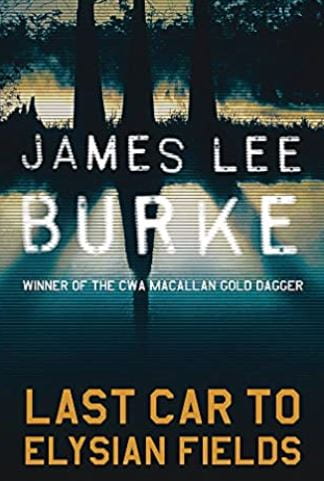 I love Dave Robicheaux books and so Last Car to Elysian Fields is no exception. This is No. 13 in the long list of the Robicheaux series, first published in 2003. When I used to teach primary school how to write about authors, one activity I used to do with them was jot down all the words that sprung to mind about the books – themes, characters, settings and anything else that was sparked by what other people said. So, here goes my list for James Lee Burke: dreams, visions, evil, music, mafia, alcoholism, Catholicism, child predators, power, money, american class system, the deep south, mercy, redemption, justice, inequality, corruption, the past impinging on the present, guns, underbelly, bigots, bullies, trickster, god-haunted, war, loss and that’s just for starters.

This book has them all to some degree plus the usual complex plot I expect from Burke. The Elysian Fields are the Greek afterlife where originally Gods and heroes went and eventually those who were related to them; the righteous and the heroic. The story starts off with a car of 3 teenage girls careening off the road and bursting into flames with no one left alive. The driver was under the influence of alcohol and drugs and so was blamed but of course as the story goes on, other sub-plots, a priest and an IRA hitman, start to knit together and link into the main story where really, society was to blame for the death of the teenagers. As so often happens in Burke’s writing, what starts off as a small-town incident blows up to encompass the rich and influential, the mafia, musicians and women and becomes a much bigger statement about life in general with Robicheaux as the superman of injustice. I think the story is about change but also about class and how those who are evil are not always so obviously visible. Coll the hitman looked strange with his small ears and narrow shoulders but Lejeune was smooth and sophisticated but no less evil. As Clete says to Robicheaux,

You’ve been at war with these people all your life.

But most of all, I think it is about redemption. Coll the hitman eventually turned to Father Dolan and didn’t kill in the end and Robicheaux is looking for redemption having set up killers to kill other killer.

The place is as much a character in the book as the people are.

My windows were open and in my sleep I heard the wind in the trees, a solitary pecan husk rattle on the tin roof, a workboat chugging heavily on the bayou. The air was cool and clean smelling with ground fog, rainwater ticking in the trees and I felt Snuggs walk across my back so he could sniff the breeze blowing through the screen.

This isn’t one of his exceptional books, it is in the middle of the series where the books became a bit samey but it is one of many, all of which I have read at least twice.