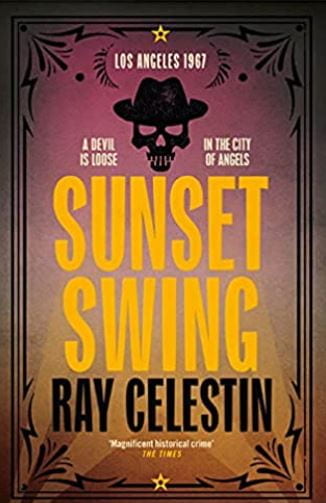 If you didn’t know that this book was the fourth of a quartet of books you soon would. Sunset Swing, set in Los Angeles in 1967, is where Ida is now a retired detective, Dante the Gent – part of the Mob – is retiring and moving out to a vinyard, Louis Armstrong is not well and has to reduce his playing and Kerry, a military nurse on R and R from Vietnam is looking for her brother. Even the backdrop is on a downward slope,

It all meant that the Sunset Strip . . . was seedy, scruffy, battle-scarred, loomed over by giant billboards that glinted in the sun, packed with raggedy-looking runaways and madras-clothed hippies standing on street corners selling copies of the Los Angeles Free Press. As Ida took it all in, she had a sense of her city slipping away from her.

Sunset Swing is as magnificent as the previous three titles, The Axeman’s Jazz, Dead Man’s Blues and The Mobster’s Lament. The book introduces us to four stories that seem quite separate but of course all come together to be one big, fraught, complex and long-running saga based on true events although the book is most definitely fiction.

This lashing together of entertainment, organised crime, politics, the bilking of the taxpayer, all done so brazenly, so openly.

Whilst Kerry is searching for her brother, Ida is lured away from retirement by the ghost of Faron, someone she has faced before but never managed to catch, and Dante has to find the missing son of his boss. But these are not the only characters in the book. So is Los Angeles. The descriptions of the place are searing and direct and I was quite surprised to learn that Celestin is British and based in London.

Louisiana folklore also plays its part in the book: it drives the plot forward and provides some of the menace in the story. But there is also the music weaving in and out of the book, providing moments of release of the tension and providing a way to explain how people feel. This book is linked to Chet Baker’s Alone Together and to Louis Armstrong’s What a Wonderful World, both quite haunting.

Is the next series going to be about Kerry Gaudet taking over from Ida?