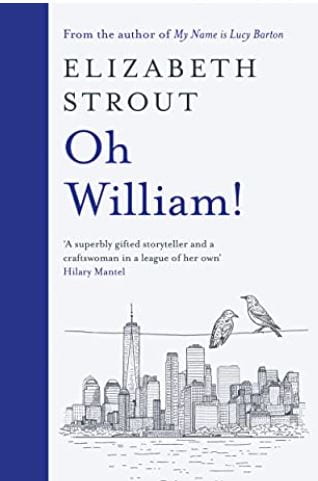 Oh William! is Lucy Barton’s reflection on her marriage to William, the man she has stayed friends with and whom she relies upon to help her out in times of crisis. It is an emotionally forensic picking over of the marriage and why it failed.

William is a scientist, a parasitologist – make of that what you will, who calls upon Lucy when he starts to have night terrors rather than turn to his current wife. Through their meetings and a trip to Maine, Barton reflects on her marriage to William and tries to understand her feelings about him both when they were married and afterwards.

Through the book we are gradually introduced to the childhood that Lucy had – one of great poverty – and the impact this has had on her. The terror of turning up at a hotel with a swimming pool and not knowing how to behave, not having the right clothes to start college or even a suitcase to carry them in and then there is her second marriage where she marries someone like herself, someone who has been isolated from mainstream life.

But it also turns out that William’s mother – she who plays golf and dresses well – also came from nothing and in a moment of great clarity Lucy believes that he married his mother only for William to dismiss such a thought. Linking back to The Vanishing Half by Brit Bennett, the ‘passing’ does not only have to be from black to white but also can be between classes’

Catherine, you did this, you managed, you crossed lines in our world! Her playing golf. Her trips to the Cayman Islands. How is it that some people know how to do this, and others, like me, still give off the faint smell of what we came from?

Throughout the book runs a stream of loneliness in Barton and a need to feel safe, which is what her marriage to William provided. He had authority and this was reassuring until she realised that she had been sustained by a myth. It is the kindness of Lucy Barton that she doesn’t want William to know this.

But we are all mythologies, mysterious. We are all mysteries, is what I mean.

This may be the only thing in the world I know to be true.

The writing is tremendous. Written in the first person, it is almost as if you are sitting there in the Lucy’s head hearing all these thoughts running through. There are lots of interruptions and speech-like mannerisms such as ‘I guess’ to show her uncertainty, and ‘I mean’ to explain herself more clearly and is what I think would be called ‘Realism’ – an accurate depiction of contemporary life particularly when it is mundane, every day experiences. It is detailed, with every little event recalled, including speech and feels a little old-fashioned. The descriptions come through what she thinks and feels rather than what she sees.

It is almost perfection.