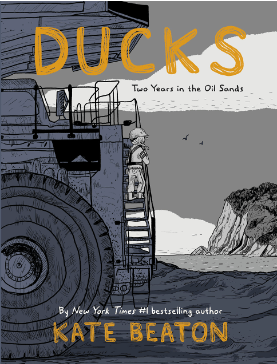 I do love a graphic novel and so looked at all the best of 2022 lists for these books and this one appeared the most, including on some lists that weren’t purely about this type of book.

I don’t buy these books often because I read them so quickly: it doesn’t feel like very good value for money and you can’t find them in the library.

This story is about paying off student loans by leaving home and going to work in the oil sands – not an easy option for a woman. Beaton highlights the damage to the environment and the worries of the First Nation community but nothing gets in the way of oil.

People are moved around from camp to camp and they are mostly men, making them very difficult places for women to work, particularly when you are in dormitories that are not single sex so men can try and get in your room at any point. The grinding grudge of this book was the way that Beaton was treated, the numerous micro-harassments that start to drag you down and I found that this went on for a bit too long in the book to the detriment of the environmental message.

But as Beaton says, she is very conflicted about these places because she was able to pay off her loans and go back to live in Cape Breton where there is not really any work for graduates.

The images are all in shades of grey which suits the content well and I particularly enjoyed the larger views of the place, both on camp and off camp. The book is called Ducks for a couple of reasons. A flock landed on some water on the camp and all died. Instead of cleaning up their discharge water, the companies installed shotgun sounds to prevent the birds from landing. It doesn’t really solve the problem. It is also called Ducks because women are sitting ducks for men’s attention, wanted or not and it does start to affect your image of yourself. These were not men who were attracted to her as a person, but her as a woman where there weren’t many and as she says, why wouldn’t your dad, uncle, brother or sons turn out to be like them in this environment. People were treated as commodities and so they treated others in the same way.

At one point, Beaton leaves and gets a job in a museum part time, work she studied for, and as a waitress part time in a lovely town but here she is sacked because she didn’t smile enough at the customers. It seems the world always expects something from us. Smile! Be grateful for the attention!