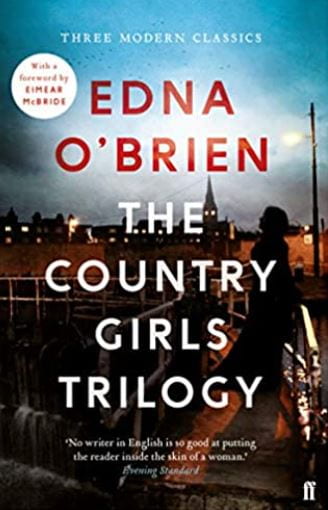 This is our next book club read and when I looked through the list of O’Brien’s titles I realised that I had never read any of her books.

The Country Girls is the first of her books and the first in a trilogy of the same name, published in 1960 and set in Ireland. Cait and Baba are friends of the sort put together through necessity and have a love/hate relationship. Baba comes from the wealthier family, Cait from an abusive one with an alcoholic father and a mother who it is said dies but I am still unsure whether she does or whether she just leaves the family. Her body is never found.

Cait wins a scholarship to a convent school and Baba goes too, paid for by her parents. They manage to get themselves expelled and get jobs in Dublin and move there. Throughout the years that this is all happening, Cait dreams of a middle-aged man called Mr Gentleman and he grooms her but of course at the very end fails to live up to his promise. The relationship between the two girls reminded me of that in My Brilliant Friend – Elena and Lila – one more passive and one more ‘brilliant’, leading the other to do things they wouldn’t have done on their own.

This book was burned and banned when it was first published probably due to the very strict Catholic Church at the time and the fact that the book acknowledged female sexual desires, a thing probably frowned up on. Strangely, I found the alcoholism and physical abuse more upsetting because I couldn’t quite get a handle on what O’Brien was telling us about the relationship between Mr Gentleman and Cait. She portrays him quite sympathetically and he always seems to have a sad expression on his face when kissing Cait or talking to her. He doesn’t come over as threatening although there are small hints about a sterner, more rigid person every now and then when he tells her not to say things like she loves him or she can’t wait to see him. He is, however, the exact opposite of her father and possibly attractive for those reasons.

I enjoyed O’Brien’s writing and her use of language. There is nothing too fancy just clear descriptions of the place and the people with plenty of use of the senses – sound and smell seem important and as fixed as the visual information.

The table was set for tea, and I could smell the delicious odor of hot mince pies.

The hill rose between the trees, and it was dark in there because the leaves almost met overhead. And it ws quiet except for the clink-clank from the forge where Billy Tuohey was beating a horseshoe into shape. Overhead the birds were singing and fussing and twittering.

Edna O’Brien talks about her memoir saying that when she remembered she was ‘back in it’ and I think if you are truly back in it the sounds and smells will be there as well. Although this book is not a memoir, she is obviously writing about things that she knew as well as imagined events.

O’Brien believed that her book was an elegy or a love song to Ireland and parts of Ireland did not take it that way. Perhaps they didn’t like a mirror held up to themselves. It isn’t always pleasant.