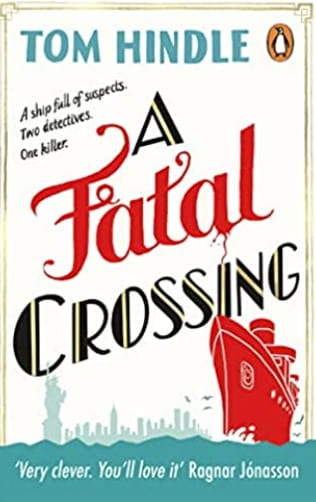 I am a little suspicious of books heavily promoted by book chains – Waterstones in this case as it is their book of the month. Are they paid to promote it? Are the staff on commission or some reward depending on how many are sold? (It certainly felt like it where I bought it. I heard the bookseller recommend it to at least three other people.) How are book of the month selections made?

I also looked at the reviews it had and in general it was in the 3.5-3.8 stars out of 5 on most sites that use stars but had 5 on Waterstones so that stood out as being a little different. However, I bought it and it ws a perfectly pleasant read but not an amazing 5 out of 5 read. It is a debut novel and that is in itself impressive but still not enough to gain more stars.

Set in the 1920s on an ocean-going liner on the way to America a body is found and there just so happens to be a detective on board. The Captain of the ship allows him to investigate but one of his officers must accompany him at all times so this provides the detecting duo with both being reluctant partners.

As the author was only 26 years old, I think that there are going to be many more books from him and will certainly be someone to keep an eye on to see how they develop.