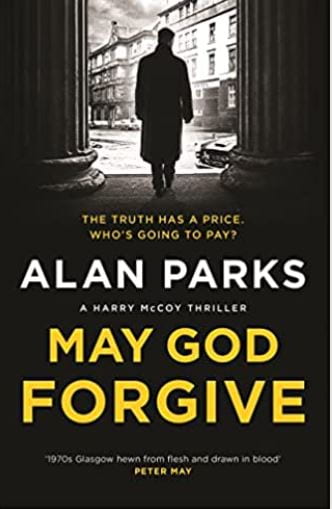 This is a 1970s detective story set in Glasgow – a time when the police did what they wanted and the ends justified the means. There are all the things you would expect – seedy bars, alcoholics, police who grew up with the criminals and priests who abuse young people. And, there is also Harry McCoy, a detective with an ulcer who works best as a loner.

The story is about solving a crime where women and children were killed in a hairdressers and the resulting fallout. Which crime boss ordered the hit, who benefits and what are the other motivations? Of course, there is more than one and McCoy spends quite a bit of time following the wrong leads and ideas until he hits on the right one. A woman who can’t have children!

In places this is quite a gruesome book with plenty of blood and torture so cozy crime it is not. Even the detective can not face being in the morgue or looking at the bodies when they are found. This is a book of hard men but there are times when they cry – about their childhood, the thought that they might have lost their son and when their dad appears not to recognise them. In this way, it is a story about fathers and sons and mothers and daughters as much as anything else.

This is the fifth book in the Harry McCoy series so I will go back and read the rest as they are definitely worth it. I understand that some of these books have already been made into a television series and I am sure this one will be too.