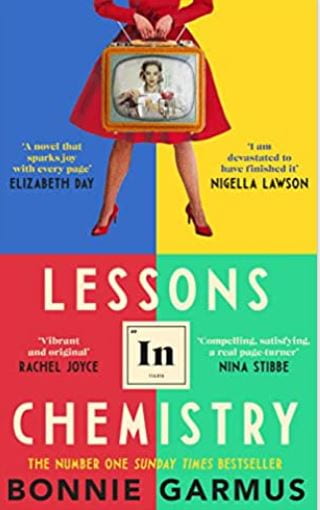 This was our most recent read for book club and we were in good company: Belletrist book club had it as their book choice in May; Good Morning America book club in April and Love Reading book club in May. It is the first time I have seen one book appear in so many around the same time.

This is a book about a woman, Elizabeth Zott, who faces just about every type of misogeny, sexism, stolen research and abuse that a woman can take and still refuses to change and become anyone other than herself. She is a chemist and the world of chemistry in the 50s and 60s does not come out of this book well. The abuse even touches on the low-level stuff that is very hard to complain about. Everyone else has their name on their lab coates But Elizabeth Zott has her initials EZ on hers as a joke (only found funny by the men in the lab). If you complained you would be accused of ‘losing your sense of humour’ – or is that something that is just said to me!

As a result of losing her job, Zott appears on TV in a cookery show and turns it into a chemistry lesson every day and is watched by women who are interested in and want to know more about cooking but it also turns out chemistry as well. I love her catch phrase at the end of each programme she records when the food is ready:

Children, set the table. Your mother needs a moment to herself.

But the chemistry is not just about cooking and research but also the way she describes love. It must be chemistry if you fall in love at first sight and if you fall out of love just as easily, the chemical connections are broken.

Whilst Zott is trapped in society’s expectations and refuses to conform, the men in the book are also trapped in stereotypes. There is the boss who is a bully and a chemist who is not bright enough to be in the lab under his own steam and so has to come to Zott to work out what the chemistry is that he is working on. In the same way that women kicked against the expectations, surely there must be men who did so as well.

There is a lot of humour in the book but Elizabeth is always dead pan and I was expecting to find out that she was on the autistic spectrum. It is never referred to but hard to believe that she wasn’t and her husband as well.

Elizabeth and Calvin’s daughter, Mad, is a genius who reads Dickens at the age of 5 but is also unlike her parents in that she changes her behaviour to try and fit in at school. She does seem to have a teacher who is the judge of all parenting and not bright enough to see when she is in the wrong. In fact many of the minor characters are very well developed and add greatly to the story.

In The Stone Diaries which we read at the last meeting, the main character that the biography was about was conspicuous by her absence. it was all about what other people thought she was. In this book we get the opposite: we know about Zott’s thoughts and desires as well as what other people, mainly men, thought about her. The feminist leanings in The Stone Diaries have to be worked at to be understood and are much more obvious in Lessons in Chemistry but no less powerful.

I loved the book and devoured it in one day whilst sitting on my deck chair in the sun.