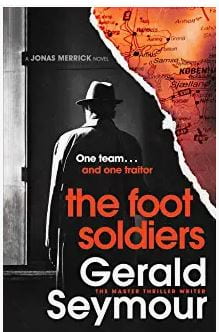 I can see why some people might liken Jonas Merrick the spy catcher to Smiley by le Carré. It is the dialogue and the ‘ordinary’ looking man who does detail and hunts down traitors.

In this story a Russian defects but gradually the British start to realise that he doesn’t have anything to offer. The Russians however, want, and need, to show the world that they never let a person go so go after him to try and kill him. They have several attempts all of which fail and then Merrick starts to manipulate the situation and catches them. This means that they can’t put out stories about their citizens being kidnapped or other lies.

Like le Carré stories, the plot moves forward inch by inch with insights into the people who were on the ground protecting the Russian although sometimes I did think that they sounded a bit like old married couples probably meant.

Running alongside this story is another in Russia of a young man in the GRU who is giving secrets away of where money is being transferred to and to whom. He believes he is being watched and so asks to be removed from Russia. At a tense point in the story we are led to believe that he s about to be picked up by the Russians and whisked off for interrogation but it doesn’t happen and is a particularly good twist in the book.

This is the second Jonas Merrick book. The first is The Crocodile Hunter and I am sure there are more to come in the series.