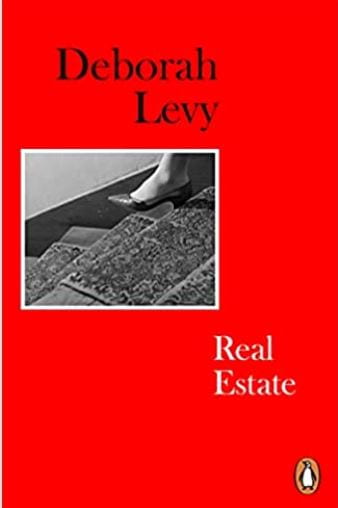 True to my style, I am reading the last of the Levy trilogy first! It just happens that way. You see a book you think you might like and bingo. Now I have to go back and read the first two of her ‘living autobiography’.

Real Estate has Levy ruminating on how to make a realistic female character in her work and in her life about herself. The real estate is an imaginary house with a pomegranate in the garden and an egg-shaped fireplace alongside other things she desires as she moves through life. The book probably raises more questions than it answers such as:

But one question she was asked time and time again when pitching for work was the question about the character “Is she likable?” as if that is all women have to be. God forbid that we have a woman who isn’t likable.

Levy writes this book as her youngest daughter leaves to go to university and she is left to create her own world – empty nest syndrome. Fortunately she is invited to work in Paris and here she explores her new apartment and still focuses on female characters; those on their high horses, those that had an affair because that was what they felt like doing and the young women that Levy’s daughters brought round to the flat to eat.

There were elements that really showed her writer’s way of thinking. For instance, she saw an old woman lean out of her flat onto the balcony to water some plants. When she got nearer she could see that the woman had drawn her eyebrows on and one was a lot higher than the other. Levy wondered what the backstory of the woman was that meant her eyebrows ended up like this and envisioned working backwards from this captured moment.

I think Levy is saying that we constantly reinvent ourselves, bringing our past and present together to do so and that our desires shape us and provide character and texture to our lives.