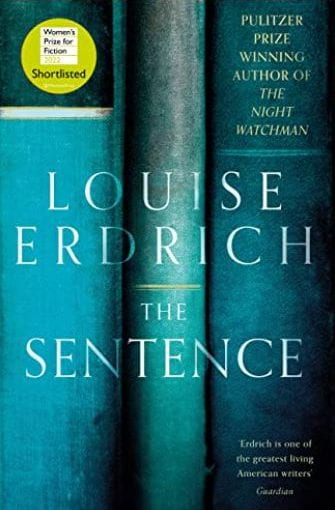 At last, the pure and fragile snow was falling upon us, separating off the air from the dirt, the living from the dead, the reader from the book.

The Sentence is a book for our times. One that tries to make sense of the ‘orangey one’s’ time as leader of the free world, the deep divisions in society that have been given the air to break free and the injustices to black and indigenous people of America. I am sure that the number of books about this time will grow in the next decade, but this is an excellent attempt at it. How do you sum up these times? What sort of genre do you use? Well, why not follow Erdrich and use a ghost story?

Tookie, the protaganist in the book, helps out some friends by moving a dead body. Unfortunately, unbeknownst to her there are drugs on this body, her ‘friends’ abandon her and she is eventually convicted and imprisoned. During her time in prison she uses books and her internal library to survive. On coming out, she gets a job in a book store that specialises in indigenous books and recovers her equilibrium as much as she can. She marries the policeman who arrested her and settles down to life.

A regular customer who is a ‘wannabe Native American’ dies and then proceeds to haunt the book shop and Tookie not just with shuffling around and pushing over piles of books but also trying to split her body and get inside (eurgh!). The rest of the story is taken up with working out how to get rid of this ghost mixed up with the death of Floyd George and the pandemic along with books and more books.

Books are a saviour in many ways. They comfort and challenge the readers, they save the book store from collapsing financially because everyone wanted indigenous books, especially schools, during this time and because they are a place of sanctuary all included in the story but also they provide The Sentence. But the book also shows the danger of misinterpreting words and fake truths and some of the consequences of these.

The book seems to have three separate sections in terms of feel. To me, the first part felt like a comic based on mythology with one of Tookie’s friends called Danae and the policeman who arrests her called Pollux. I did have to persevere at this point but soon the book became a lot calmer and sub-headings were introduced giving it almost the feel of a non-fiction book. And then came the chaos and tumult as the news-worthy events impeded on life and the ghost became more and more insistent. The picking up of speed and slowing down helped shape the story and reflected the lives of the characters particularly well. The other people who worked in the shop were wonderful and entwined in the story and its resolution.

The only other book I have read that tries to make sense of the same times is The Madness of Crowds by Louise Penny. Penny focuses on the freedom of speech but also what it means to be a parent and so does this book. Why would that be? Perhaps because of new life, overwhelming love amongst overwhelming hate and division and ultimately the hope for the future for this child and us all.

I would say that I don’t read ghost books but I just have! I loved it and I can see why it is on the shortlist for the Women’s Prize for Fiction in 2022. I think it might win.

I think this might be my choice for our book club and my questions would be: