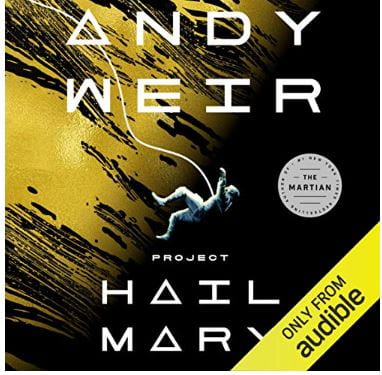 I have listened to a couple of audio books just recently and find it hard to think about them in the way I do if I have read the book myself, but one that I really enjoyed was Project Hail Mary. I can’t remember the last time I read a sci-fi book so this one was a real surprise to me and I thoroughly enjoyed it.

The basic premise is that something is eating up all the sun and that will mean an extinction event on earth if something isn’t done. Step up Dr Grace, a science teacher of junior school children, who investigates what that something is and then sets off into space to save the planet. Whilst he is doing this he meets an alien who has the same problem and together they solve it.

As a keen reader of crime and detective stories, I am very familiar with police procedural stories, so I wonder if there is such a thing as a sci-fi procedural book because Project Hail Mary draws on lots of real science and maths and explains it all in a thoroughly engaging way. I did snort though when Grace had to think of an easy way to explain relativist physics to an alien who had never come across it – what about a human who doesn’t understand it?

This book is no Star Wars – there are no intergalactic battles – more a detailed exploration of how we might meet aliens, how we might communicate with them and gain an understanding of them even when they live in very different atmospheres and how they might have evolved over time. I have no idea but I am imagining that the science and the maths included in the book is real but I was left with questions about the science which will need further exploration in the future. It turns out there is a theory that you might not need water for life to start – you need another solvent for biological chemical reactions to take place and that could be supercritical carbon dioxide. Now you have to go and find out what supercritical carbon dioxide is.

The story starts with Grace waking up from a coma and how he comes to be there is gradually revealed through flashbacks as his memory returns which is a clever way of only allowing the reader a bit of the story at a time. There was a never ending supply of problems to be solved using science and engineering and the book was fun. I chose to listen to it when I was doing other things because it was so engaging.

The narration of the book is excellent and probably made the story for me. Porter has a different voice for each character including an uptight Dutch woman and a laid back Russian scientist. It is told in 1st person and the voice Porter uses for Grace is very real and brings the character alive. I can see why it won an Audie Award.

Apparently there is a line in one of Weir’s previous books, Martian, where he writes “I am going to have to science the shit out of this.” and it would stand true for Project Hail Mary.