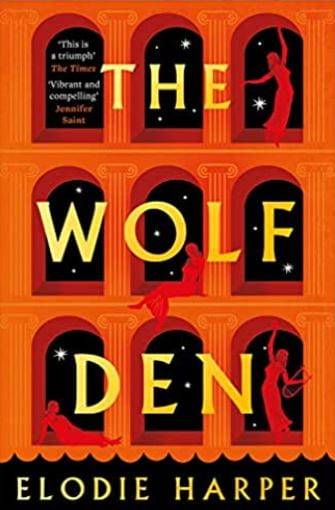 Wolf Den is the first in a trilogy of books that reimagines the stories of women that time has overlooked. This book is set in Pompeii and is about a group of she-wolves or prostitutes and their lives.

The story is a little bit Officer and a Gentleman with Richard Gere, I am showing my age here, in that the main character Amara eventually becomes a free woman and leaves the brothel.

The character of Amara is well-developed, a doctor’s daughter who through mismanaged money ends up being sold by her mother and then cheated by the man who bought her. The brothel she lives in with other women is small, hot and has cells which is where each woman sleeps and sees her customers. Amara plays the lyre and sings and it is these skills that eventually bring her to the attention of men with more money and leads to her finding a man who buys her freedom.

Don’t read this book if you have a sensitive disposition or do not want to read about what prostitutes do for a living. It is told quite matter-of-factly but does convey the women’s hate of what they do for a living. And what they think about men.

The story shows how difficult it is to have a man for yourself and in the end Amara turns out to be a bit like the horrendous pimp Felix but then if you have nothing, you need to be fairly hard-nosed in order to get out of your situation.

A lot of graffitti was found at Pompeii and bits of it are used to head up chapters and to match what happens. The brothel in the book is based on the brothel or Lupanar found in Pompeii as are the markets and the coast.

Ultimately, this is a book about women as friends in a difficult situation and how they care for each other.

The House with the Golden Door is the next book in the trilogy.