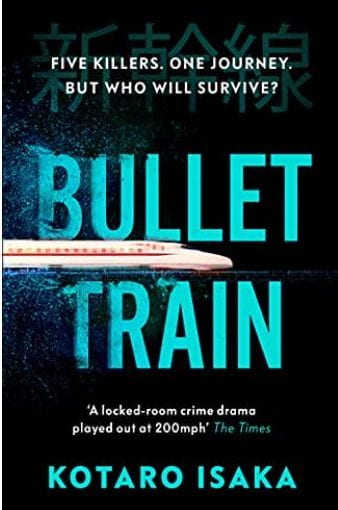 I don’t think I have ever read a book like this before. It is classic in its basic plot, people get on a train and they start to die. No one else gets on so it must be someone on the train. It could be a large country house it could be an aeroplane but in this instance it is a Japanese bullet train – a high speed method of transport.

The book is also Shakesperian in its plot with a big muddle about who is actually committing a crime in the first place and as it turns out it is everyone, well at least the five assassins, so it reads like a comedy or a farce. It’s witty and every single part of the train is used from the cupboard the rubbish bin is in to the toilets and corridors with sliding doors as well as a tea lady that goes up and down regularly.

The characters are well-described, all a little oddball such as the duo Lemon and Tangerine (I still can’t think why they would be called that) with Lemon obsessed with what is called Thomas and his Friends but I know as Thomas the Tank Engine. There is Nanao who has the worst luck out of everybody and if it is going to happen, it will happen to him and then there is The Prince, a 14 year old boy who is truly an unpleasant character, probably a psychopath, and looks totally innocent.

I have to admit to getting half-way through the book and thinking I couldn’t take any more of the silliness as it became a bit repetitive so I jumped towards the end and was able to pick up what had happened and continue reading. I liked the little train with its carriages shaded to show you where the action was taking place at the start of each chapter but you only needed that because the plot was so backwards and forwards.

I understand that there is a film of this book with Brad Pitt in it due to be released this year, 2022. The trailer looks good.