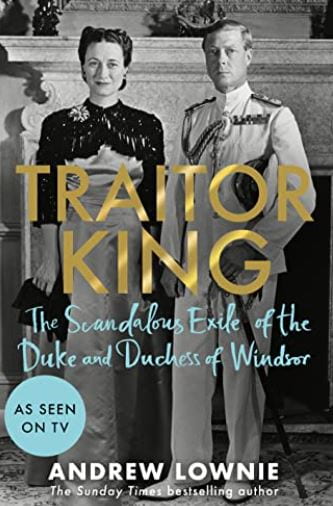 The Scandalous Exile of the Duke and Duchess of Windsor

I am not sure why this book is called scandalous because I thought we all knew that they collaborated with Hitler and the Nazis and that Simpson had had an affair with Ribbentrop but I will concede that maybe I didn’t know it in detail and now I do. May be it has something to do with the fact that people believed he was gay or bisexual as well – not really scandalous nowadays.

This is a well-written account through letters, memos and interviews with those who had reason to come into close contact with the Windsors. By all accounts, and there were a lot, he was a spoilt, petulant child who wanted the perks of being royalty (whatever the person may perceive those to be) with none of the difficult or more boring elements. He demanded time and again that he be given a job by the royal family or the then government and when they wouldn’t provide one that was deemed satisfactory to his position, he seemed unable to go out and find it himself and make himself useful. In fact their lives were driven by what they felt they should have been given and what they had. At that time, when Britain was at war, many people would have given up a damn site more to have the life they did.

It is hard not to draw parallels with recent events. The Windsors said they were friends (lover for Simpson) with people like Ribbentrop before the Nazis and so stayed friends throughout and after the war. The damage this did to their reputation was irreparable and you can’t help but think of Prince Andrew and his friendship with Epstein. Prince Andrew now needs to find new ways to entertain himself.

And then there are the parallels with Harry and Meghan who have abdicated from their royal role for a variety of reasons and who also must earn money and fill their time. If we learn anything from the Edward and Simpson abdication it is that once you step out of the responsibilities you really are out – even of the aspects you hold dear. Only working royals will appear on the balcony at the queen’s platinum jubilee so no Harry, Megan and Andrew.

It was an inspired choice to read this biography after reading The Stone Diaries – I didn’t plan it, this was just the next book I picked up. What the Stone Diaries did make me think about as I read this is who is telling this story and how far away is it from the story that the Windsors might tell. Quite a long way if you are to believe what they wrote in their autobiographies. Which goes to prove Shields’ point – can we really know people from their biograpies and autobiographies?