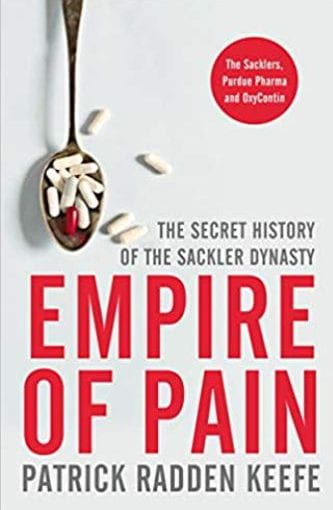 When a book pops up as an award winner and is then highly recommended by others I feel I need to read it and that happened with Empire of Pain. It won the Baillie Gifford Prize for non-fiction in 2021 and I have no doubt will appear again in the long and shortlists for prizes this year. I also had to wait months for a copy from the library – another indication that it is good.

Patrick Radden Keefe is a staff writer for The New Yorker and I think it would be fair to say that only an investigative journalist could wade through all the papers this case has produced to find the heart of the story. The book doesn’t focus on the families who have suffered at the hands of the Sackler’s and their drugs, but on the Sackler’s and how they arrived at this point.

This is not a short book – in fact it is three books in one – and even the notes referencing all sources are long enough to make a book of their own, but it does roll along, pulling you with it. I became more and more angered by what the Sackler’s have done but also by the way government and others have ensured that they haven’t paid personally.

The book tells the story of three generations of Sackler and their journey in pharmaceuticals from Senokot to OxyContin with Valium as a stepping stone between the two. What really riles is the fact that there are patterns that emerge about the family that are repeated again and again all over the world by people who have money and have done something wrong. First deny it then settle out of court. You might get pay-offs with no admission of guilt. Blame the victims because looking into someone’s background and finding something there must mean that you are not guilty and they brought it on themselves. Allow yourself to be found guilty of a minor misdemeanor and then carry on as you were. Use your money and connections to put pressure on those making decisions. All of these have happened again and again. Think of violence against women, Prince Andrew. Think of the tobacco industry or Russian oligarchs and the British government naming and then un-naming Abramovich, the owner of Chelsea football club. The public can’t see why he wouldn’t be named and no one will explain. The thing is the Sackler’s did it all, looked smug and got away with it in terms of their own finances.

They (David and Joss Sackler) were rumored to be moving to London, a city long favored by oligarchs with unsavory fortunes, which might offer them a more congenial base of operations.

What they didn’t get away with was their ‘good name’. The book is based on the premise that nothing counts as much as your good name and in the end that has been trounced. Thanks to the efforts of people who have lost loved ones to addiction, be it OxyContin or heroin, artists and students, their protests eventually got through to the museums, universities, medical schools and other large institutions and one by one they removed the Sackler name and refused further money. The irony of it is that on their Whatsapp chat the family were complaining that their children were suffering as they wouldn’t get into the schools they wanted them to go to. Oh dear! They are not orphans having lost their parents to an addiction and nor are they homeless. We used to say after 2008 financial collapse that the bankers ‘just didn’t get it’.

Well, nor do the Sacklers!