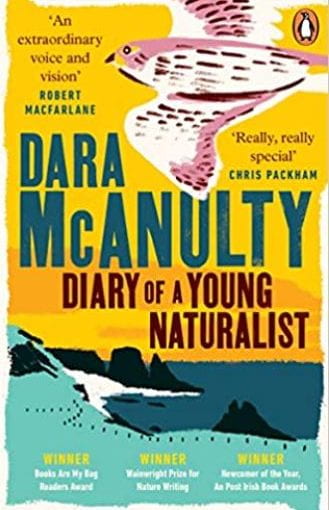 This was the perfect book to read after Bewilderment by Richard Powers. They compliment each other in ways you couldn’t plan, helping me to understand more about Robin through Dara’s diary.

Diary of a Young Naturalist charts the course of a year in nature but also equally importantly, a year in Dara’s inner and outer life and is a drawing together of the two things, helping to explain Dara. He sees nature in great detail, feels butterflies and spiders land on him and notices the noises of nature that we might hear as background noise if we hear it all. It is this noticing that provides him with relief from the world and people, often entering a trance-like state until called out of it by a member of his family to continue on their walks or adventures.

During the year, Dara and his family move house and he starts a new school – a point at which I wondered how he was going to manage such a change. But it turned out that his new school seemed to be just right for him. The bullying, name-calling and beatings up didn’t happen and that made me really angry with his first school. How could they have allowed this to happen to him? Either they didn’t know or they didn’t care, both are inexcusable. In fact, Dara is more than capable of telling you what sort of education he would like and needs – to be learning outside.

The writing is remarkable for a 14-going-on-15 year old with an overview for each season followed by the diary entries. And like Robin in Bewilderment, Dara struggles with the adult reaction to what is going on.

Globally, we have lost sixty percent of our wild species since 1970. And it’s my generation that is labelled ‘apathetic’, ‘self-indulgent’, ‘less focused’! Whereas the adults, who are actually in control of our access to wildlife, the boundaries between busy roads, housing developments and green spaces, carry on making decisions and spending public money in conflict with nature.

The love he has for his family and the they have for him is wonderful to read about. There are three children in the family, all who have autism, and are as he says ‘as close as otters’. I shed a few tears at the end for a boy who has started to find his way in the world and wondered what it must be like for all of those whose parents are not able to offer what Dara’s have. You have to wonder what might happen if we skipped a generation when thinking about care of the planet and handed it over to young people before we wear them down with our apathy and self-preservation. I for one, would gladly let Dara make decisions about what the natural world needs.