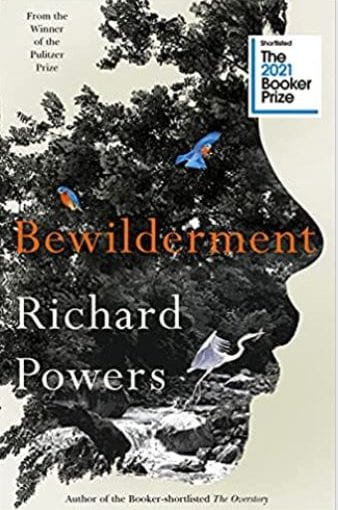 Is this sci-fi or a cli-fi? It probably doesn’t matter but it is certainly set in the near future with a slightly skewed version of our times or one step on from our times politically.

There is so much of the now in this book – it is a swift read because of the short chapters, some only half a page long – that it reminds me of a Reacher novel where things roll along and get quicker and quicker as you get to the big fight scene. Despite this, Powers has woven a lot of contemporary issues into the book:

He’d learned more in one summer, on his own, than he’d learned in a year in a classroom. He’d discovered on his own, what formal education tried to deny: Life wanted something from us. And time was running out.

Most of all, I think this is a book about a loving relationship between a father and a son when they really only have each other. It is an intense relationship with instances of Theo admitting that he made some wrong decisions in his parenting. The book is single-minded and very focused, not unlike a neuro-divergent mind can be, in the pursuit of a child’s bewilderment at adults and their inability to see things as they do and act upon them.

I was bewildered in parts. It took me a while to realise that they visited other planets in their imagination, using Theo’s work to create the place and what was happening regarding life on them. There was also a message in this book about being wilder (be-wilder), the calming effect nature can have on people, their anxiety and stress and its importance in our life.

Oh, this planet was a good one. And we, too, were good, as good as the burn of the sun and the rain’s sting and the smell of living soil, the all-over song of endless solutions signing the air of a changing world that by every calculation ought never to have been there.

I didn’t understand the relevance of the Flowers for Algernon short story so had to look it up. Bewilderment is that story re-imagined.

There is a lot to discuss in this book so it would make an excellent book club choice.