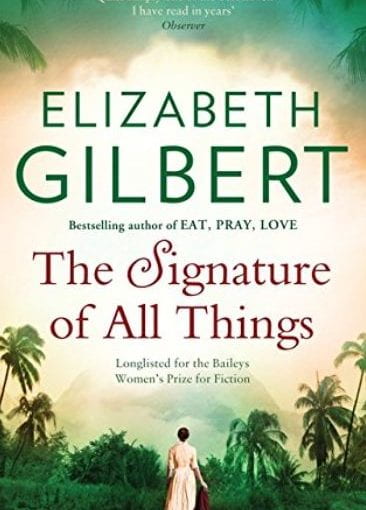 The Signature of All Things tells the story of Alma Whittaker from her birth to her death.

She was an unusual child, unusually educated with unusual parents who treated her as a mini-adult, expecting her to sit after dinner and converse with the great minds of the time that were invited to dine.

However, like everyone else, Alma yearned for love and was disappointed when her pretty, adoptive sister appeared, only to realise that she was not pretty and the impact this would have on her life. She endured heartbreaks, a mariage blanc and a lack of understanding of other people because she had not been trained to think in those ways.

I have read reviews that say they feel distanced from the story and characters and I agree but not that this is a negative but rather a positive. It reads like a biography or a science paper where we are observing Alma and that she is our subject.

Ultimately, this is a story of female sacrifice and a desire to understand human behaviour. It is written to highlight women in the field of science who were/are overlooked by men, had their work stolen by men or who had men present their work as their own. I am thinking here of Mary Anning and Ada Lovelace as two such examples. In this book Alma is the small, possibly boring moss to their showy and much prized orchids. However, no matter the starting point Darwin, Wallace and Whittaker come to the same conclusion at roughly the same time.

This is also a story about Alma’s sexual desire, about discovering and accepting it even when it was not reciprocated. But Alma lived long enough to know love of many types and in the end was content.

The writing is wonderful. I particularly love what I call Gilbert’s listing style of writing. She has lists in sentences,

She was her father’s daughter. It was said of her from the beginning. For one thing, Alma Whittaker looked precisely like Henry: ginger of hair, florid of skin, small of mouth, wide of brow, abundant of nose.

But sometimes her lists last across paragraphs and pages, for example on pages 59 and 60 where Gilbert describes all the things that Alma learned about her father, taking 5 paragraphs and two pages.

Or sometimes it is a listing of sentences such as the time on Tahiti when the rainy season had stopped.

She cleared the moldering grass off the floor of her house, and brought in new grass once more.She restuffed her mattress with dry straw. She watched the lizard population diminish as the days grew brighter and crisper. She made a new broom and swept the walls free of cobwebs.

The effect of this listing is to see exactly what is going on or what a person looks like with no obfuscation – a directness which is exactly like Alma and her father.

I can not imagine the research that must have been undertaken to write this book; shipping, botany, mosses, the 19th century, Philadelphia, dress and sex and marriage in the 19th Century. This video clip is Gilbert talking about writing this book and coming back to fiction. I would love to see the six shoeboxes of cards where the research is recorded.

If you enjoyed this book, you might also enjoy Everything the Light Touches by Elizabeth Gilbert