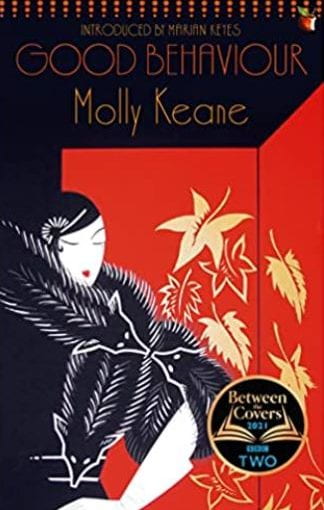 This is a cruel but fantastic book. Good Behaviour starts in the present day(when the book was written) with Aroon St Charles killing her mother by feeding her rabbit, something she had always hated and Rosie the cook/nurse/maid shouting at Aroon about what she had done.

Rabbit – rabbit chokes her, rabbit sickens her, and rabbit killed her – call it rabbit if you like. Rabbit’s a harmless word for it – if it was smothering you couldn’t have done it any better. And – another thing – who tricked her out of Temple Alice? Tell me that . . .

And so, the story is set. Aroon’s mother has died but we are not entirely sure how and she was tricked out of Temple Alice which we assume was her family home. The book then jumps back to when Aroon was a child and, narrated by Aroon, describes how they ended up in this situation.

Set in post World War 1 times in Ireland when the aristocracy were declining, the book is full of food, clothes, sex, death and of course Good Behaviour, through all of which Aroon eats.

Her mother is an emotional ice-cube and nowadays we would call this sort of mother/daughter relationship abusive. She puts Aroon down at every occasion possible, is dismissive and represses her emotions at all times – good behaviour stops emotions being displayed. She hides the bills that demand payment and disappears into her painting and gardening where,

She was considerate towards weakness and eccentricity in plant life.

Her father was a serial womaniser – his wife, the governess, twin sisters living near by, the cook and one imagines many more women when he disappeared to London. The only woman he left alone was Aroon, although he had more of a relationship with her than her mother did.

Reading this book is a bit like a those murder mystery parties because clues to what is really going on are sprinkled liberally throughout the book but our narrator, Aroon, chooses to see them all in a very different light. She appears naive but I am not sure she is. Part of the good behaviour was pretending that things weren’t happening – a collusion of sorts and the family colluded greatly.

Then I fattened out my least memories, slyly building a future.

I was surprised by the ending and had to go back to the beginning and read that section again. It all hangs on that word ‘smothering’. What goes around, comes around as they say, especially when abuse is concerned unless characters are self-aware enough to put a stop to the behaviour. When it comes down to the nub of the story

I was a changed person, where my love was recognised and requited.

I enjoyed this book very much and am left wondering whether it would make a good book club choice. It is not a book where I think you would have questions but more share what you thought about characters and how they impacted on the story. Perhaps the characters could be shared out amongst the group with individuals or pairs leading the discussion around them and their ‘Good Behaviour’.