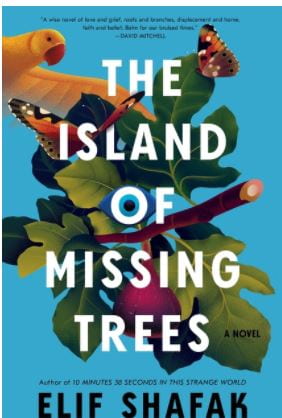 I picked this book up to read because someone in the book club had chosen The Bastard of Istanbul by Shafak and the group had enjoyed it. I also picked it up because it had trees in the title and I am a bit obsessed by trees at the moment (not necessarily a good way to choose books, but hey!) Anyway, I can’t quite make my mind up about The Island of Missing Trees. It is shortlisted for The Costa Novel of the Year and had quite a few rave reviews on Book Marks so I can’t help feeling that I am a bit out of step here, not that there is anything wrong with that.

So, what about the book? Its roots are set in Cyprus in the 1970s when conflict between the Turkish and Greek Cypriots erupted and tore the island, communities and neighbours apart. Shafak’s descriptions of the island and of the cooking are delicious and truly transport you to the place.

‘Every time I come to Cyprus, I gain ten pounds,’ said David, patting his belly. ‘That’s one thing Greeks and Turks can agree on.’

There are many lists of foods such as this. There is the menu from a different tavern, the breakfast cooked by an aunt and how the same food has different names depending on whether you are Greek or Turkish.

The description of Cyprus that Kostas, the father of Ada, returns to in the late 2010s shows the changes since he was last on the island.

Pine, cypress, olive and carob trees were interspersed with patches of arid earth, sun-baked and monochrome. Citrus orchards had been chopped down to make way for smart villas and apartments. He was saddened to see that this part of the island was not the verdant paradise he remembered. Cyprus was known in antiquity as ‘the green island’, famous for its dense mysterious forests. The absence of trees was a powerful rebuke to the dreadful mistakes of the past.

But in the case of both of these quotes which help me imagine the place, there is a second part that tells me what to think rather than suggesting it or allowing my mind to make connections. The telling of the idea that both Greeks and Turks can agree on this one thing that food is good is very obvious as is the sentence about the absence of trees and its meaning in the book in the second quote. This telling happens quite a lot throughout the book.

The story revolves around Kostas and his daughter, Ada, a teenager struggling after the death of her mother, feeling that she is missing something, something that her parents never talked about: where they come from and how they ended up in London and, in particular, why she has never met any of the extended family or visited Cyprus. I found this side of the story quite predictable. Kostas was Greek and Defne Turkish. An aunt on her mother’s side visits Kostas in London and the story of Ada’s parents is revealed in part to her and this settles her and reconnects her with her father.

What was less predictable was that part of the narrative is told by a fig tree, a device that allows background in formation to be provided and also adds an ecological element to the story, which I loved. The fig had been in a tavern where Kostas and Defne used to meet in secret. It grew part in the tavern and stretched out through the roof and when Defne and Kostas left Cyprus for London, Kostas took a cutting to plant in their garden. In parts, the tree does sound like it is lecturing us but of course trees do witness and are affected by human actions and so ‘see’ everything. But they are also part of an ecosystem that is often invisible to the people around it.

Towards midnight, I picked up an odd sound. Alarmed, I tensed. But it turned out it was my old friend the hawthorn tree, a native species, a gentle hermaphrodite, sending signals through roots and fungi, asking how I was doing.

If families resemble trees, as they say, arborescent structures with entangled roots and individual branches jutting out at awkward angles, family traumas are like thick, translucent resin dripping from a cut in the bark. They trickle down generations.

Divided islands are covered in tree resin which though encrusted at the edges, is still liquid deep inside, still dripping like blood.

This is a big book. A book about enduring love, trauma in families, conflict, family, memory, loss but most of all the interconnectedness of us all as demonstrated through nature. It would make a good choice for a book club to read because there is much to discuss, agree on and disagree about.