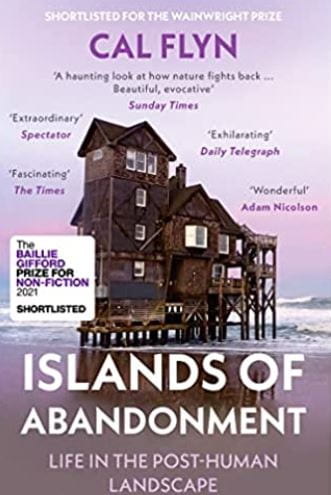 I hate goals in reading. Why not just read what you like and don’t worry about how many or what type of book you read? Well, I realised that I was only reading fiction at present and just felt like a little change. I need recommendations especially as I am not visiting book shops much to browse. I found Islands of Abandonment: Life in the post-human landscape on Book Marks where it had 7/10 raves and 2/10 good reviews and it was also shortlisted for the Wainwright Prize and is on the shortlist for the Baillie Gifford Prize for Non-Fiction due to be announced in February 2022 so plenty good enough for me.

As someone who is very interested in rewilding, this book was right up my street with Flyn’s main argument being that humans are now the dominant force of change on Earth although there are still natural forces such as volcanoes. Consumerism, waste, economic collapse, human error, life style etc, etc all mean that in a life, death, life cycle

that will ultimately bring about the death phase. Flyn leaves it to the last page to say that she believes we can fight this slow, gradual decline of the Earth, that it is not too late. The book however, is not doom and gloom. The first section, In Absentia, visits places where for a variety of reasons humans have been excluded and nature has taken over, bringing with it a far greater biodiversity than we could manage if we set out to create such a thing. These are areas such as Chernobyl, the buffer zone on Cyprus between the Greek and Turkish areas and vast areas of industrial waste. This is the natural succession of the land.

First came the wildflowers, the annuals, the weeds. Later the thorn bushes, the brambles. . . .A ragtag crowd of skinny saplings of various shapes and sizes mills around, waiting for something to happen. Bare rowans bearing handfuls of bright-flashing berries; slim and silk-skinned birches and aspens, their leaves aquiver; a thicket of thin and whippy willows, tightly spaced as cigarettes in a pack.

The descriptions are good with the writing never going too over the top or becoming too flowery. They describe the space and atmosphere well.

But not all areas that have been left to nature are devoid of humans and I found the next section, Those who Remain, quite haunting. Here Detroit is considered with the long decline of the car factories and then sub-prime mortgages, leaving the place abandoned by many and a perfect space for domicology (love a new word!), the study of the lifecycle of buildings. Here Flyn considers the phenomenon of urban blight being contagious; dereliction of one house on a street means it is more likely that others will go the same way and eventually crime moves in. But even more haunting is Paterson in New Jersey where those who are marginalised and on the edges of society have set up camps on abandoned land. Being outside mainstream society means that they are free to behave as they want although the freedom means no societal safety nets. And then it becomes not just a space that has been abandoned but also people who have been abandoned too.

The Long Shadow looks at what effect destruction leaves behind and how long these go on for. In many of the places where human error has occurred, nature shows us that ecosystems may well be more flexible than we once imagined. I loved the chapter on Swona, a Scottish island, where a few cattle were abandoned when the last inhabitants left. They have roamed on their own and established themselves as a wild herd and in fact possibly reverted to their wilder breedings or become dedomesticated. I have always wondered what permaculturists meant when they talked about a plant or animal having ‘full expression’. This chapter explained it beautifully because the abandoned herd of cattle behaved in ways which dairy or beef cattle don’t. An old black bull that had been kicked out of the herd lay dying away from the rest when the young leader led the rest of the cows over to him and they all nuzzled and nudged him as he died, much like elephants do, expressing compassion, comfort and grief. Our cattle do not have the freedom to demonstrate this behaviour even on the Knepp Estate where animals that are dying have to be shot, presumably to put them out of their misery. However, that is a human experience. Would the cattle be more comforted by their own nuzzling and touching them as they died?

On Knepp, once the cattle have died they are removed (Knepp would prefer to leave them but regulations, you know, mean that they can’t) whereas on Swona the dead remain where they fall providing for a wide variety of wildlife to come in and help the decomposing process. The cattle will revisit the dead bodies for several months, again like elephants, but will eventually walk over the skeletons as they move around the island helping to grind up the bones and return the nutrients to the earth. Who knew that cattle behaved like this?

Migration of animals and people is northwards – to the tune of 4.5 metres a year. In order to save the planet, Flyn argues that we need to show restraint and allow nature to do what she does. But this leaves two fundamental questions: How long does it need? and, How long have we got? It is already happening under our feet. We just need to allow the space for it to do so.

Surely this planet is worth fighting for.