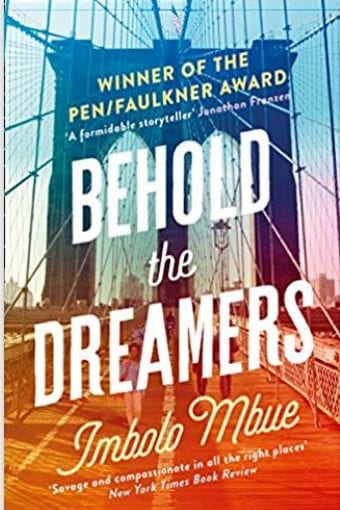 I have been putting off reading this story for some reason which is not obvious to me so this book has sat at the bottom of my TBR pile for some time. However, it is fantastic and a rather startlingly good debut novel.

Jenda and Neni Jonga come to America as economic migrants looking for a life they can not have in Cameroon. Clark and Cindy Edwards are the family that employ Jenda as a chauffeur and Neni every now and then to help out at parties or when Cindy is summering at their beach home. It is 2008 and Clark is an investment banker working for Lehman Brothers – both of these facts are presented to the reader quite early on so that we can see the impending fall-out from a mile off.

What the book then does is explore the consequences of the global financial crisis on the American and Cameroonian families.

In many different ways it would be an unprecedented plague, a calamity like the one that had befallen the Egyptians in the Old Testament. The only difference between the Egyptians then and the Americans now, Jenda reasoned, was that the Egyptians had been cursed by their own wickedness. They had called an abomination upon their land by worshipping idols and enslaving their fellow humans, all so they could live in splendor. They had chosen riches over righteousness, rapaciousness over justice. The Americans had done no such thing.

It must be quite hard for immigrants to see wealthy families with ‘everything’ and then to realise that they are very unhappy people, taking prescription drugs and visiting prostitutes all of which culminates in Cindy Edwards killing herself.

Jenda goes back to working all the hours washing up in restaurants, on his feet all day but not letting his wife go back to work. There is quite a lot said in the book about the role of men and women in Cameroonian and American marriages. In Cameroon the man makes the decisions, in American marriages the woman does and the men go along with it but in different circumstances neither are happy.

It takes a catastrophic event for both families to understand where ‘home’ is and for both it is where they came from – always the pull. For Clark Edwards it is a return to Virginia and family – somewhere he has wanted to be for some time in a way making the Edwards migrants in their own country. For the Jonga’s it is the refusal of an asylum application meaning that Jenga chooses to return home voluntarily although Neni doesn’t want to go.

I think this book is saying that home might often turn out to be the best place for dreamers and that you can return to it having made your money. It is a common story, I have lived it myself – dreaming of being anywhere other than my home town when I was young but returning there towards the end of my working life. But how many migrants can’t return to their home land? What happens to their dreams?

There are so many lost dreams in this book but also in a way many found ones too. The part about what is essential to you, ‘home’ in this case, and how you can build dreams around that is very important. It must be the essence of hope.

I gave this book 4.5 stars as opposed to 5 because I felt that Neni’s dreams were swept under the carpet just because her husband wanted to return to the Cameroon. The book does explore other ways she could stay in the country but she does choose her husband over those. The domestic violence is brushed off as normal within a family with an explanation about how it will be dealt with if it happens again. In America the state can step in. In Cameroon, the family steps in and speaks to the man and I thought this was dropped in and then abandoned too quickly.

This was a great read on my deckchair under the sun umbrella.